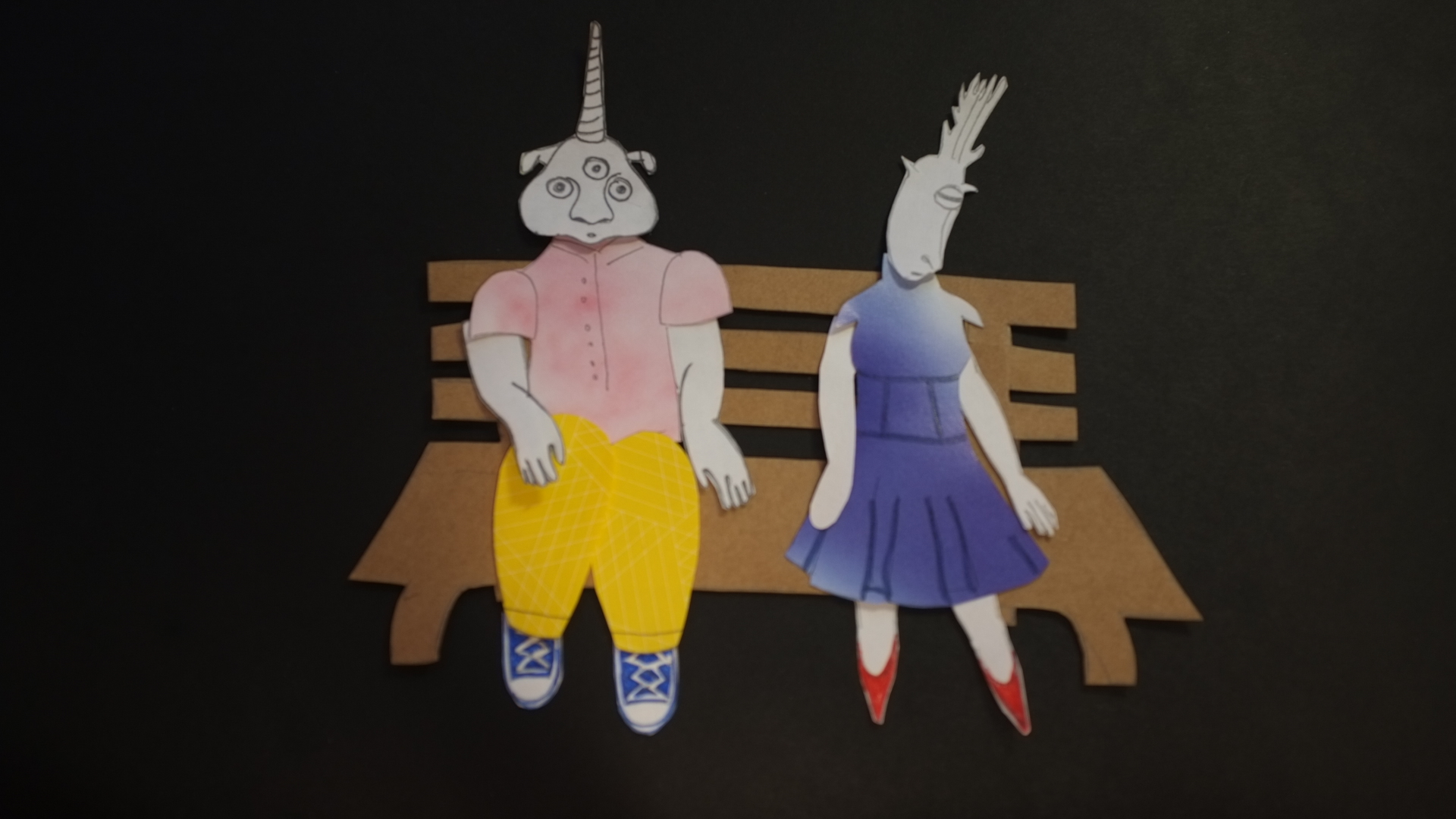 This is the documentation for the course „Moving stills in StopMotion“ with Professor Klaus Keller and Jan Schulz in winter semester 15/16.

The course dealt with different possibilities of providing shorter films with the help of Stop motion in all its variations. The course consisted from four parts in those we presented our films after production. On each project we had about 2-3 weeks. We started with the classical flipbook. Then we generated 2D animation, after that we provided 3D film and at last a film freely after our choice. 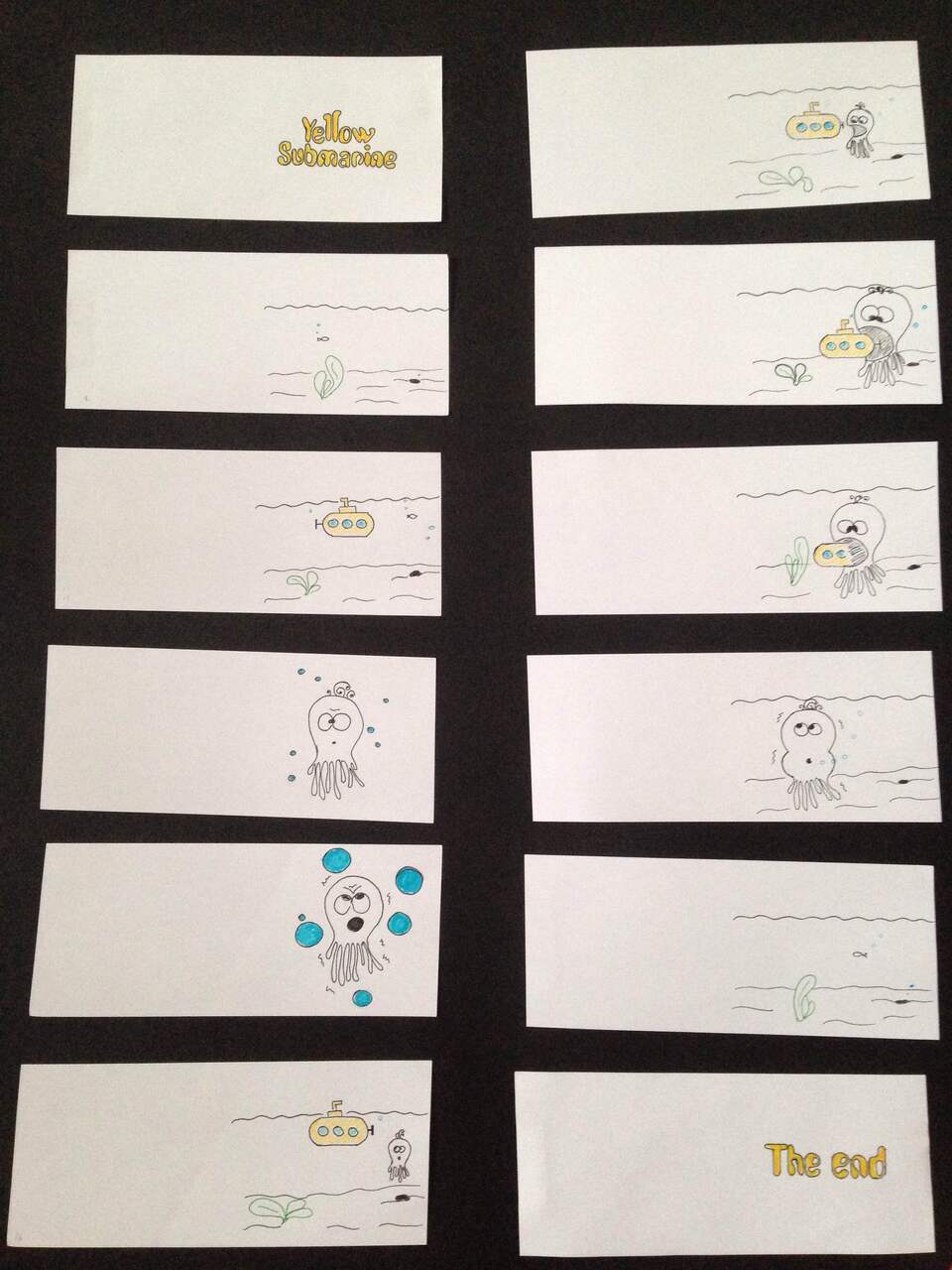 We began the course with a production of a flipbook. The principle of a flipbook helps to understand the functionality of Stop motion technologies. It helps to recognize that the principle is based on single frames which are shown one after the other and this generates the illusion of a moved picture. Besides, it is also important that a number of pictures are shown in a certain time and between the single changes there are no big jumps, so that it can be provided a very smooth movement illusion.

With my project I had a lot of ideas but I have decided to stop on idea with a yellow submarine that floats under the water and in the end it is eaten by an octopus. I have worked with the help of a window drawing one picture for another, trying not to make big intervals between movements. As paper has been a little unevenly cut, and I haven't noticed it, further it was quite difficult to look it in hands. Still I have solved this problem by scanning each picture and making the film digital.

The flipbook was a very good entrance in the Stop motion technologies. 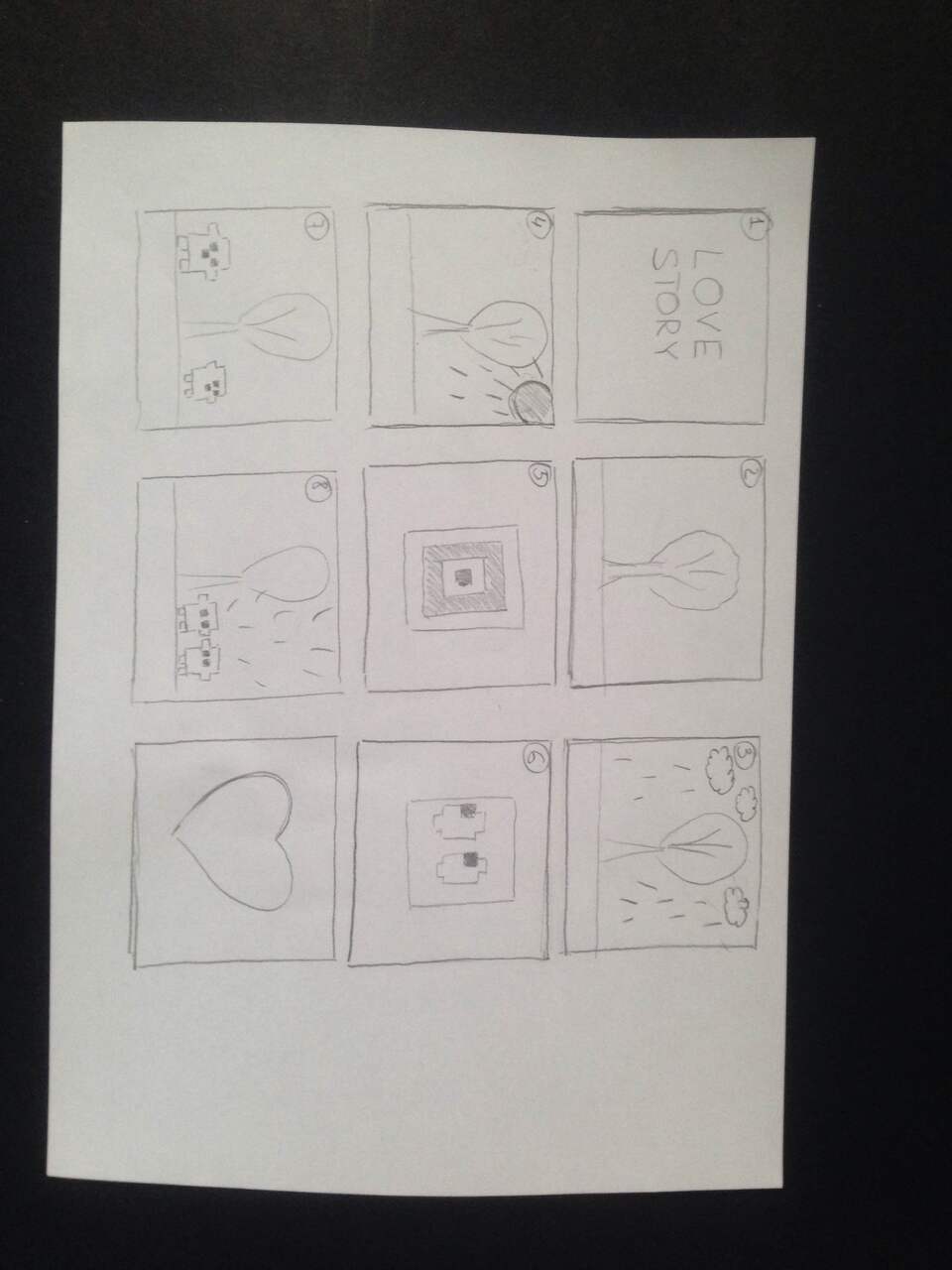 As a preparation for the next 2D project we had a workshop. We were divided into groups and our task was to make a loop animation. In this short time we have managed to make an animation of an UFO which arrives and takes away a person and then returns him back. We used a light table for drawing the pictures of our loop and then made photos of them. It was my first experience of Stop motion.

With my first Stop motion film I decided from several ideas. At first I wanted to make an animation from cutouts (inspired by wonderful Terry Gilliams’ animations) but then I decided to make a pixel animation from post-it notes on my wall. I made a short storyboard of love of two characters, bought about 1000 of post-it notes and began to glue/remove and make photos of the notes on the wall. It was more difficult, than I assumed because I worked with daylight. I spent 4 days for shootings because of the light. Further having learned on this mistake, I have got lamps and didn’t work with the daylight anymore. Then there was a long process of selection and cutting the music (Metronomy) for the animation, but I was glad to learn to work with Adobe Premiere Pro. 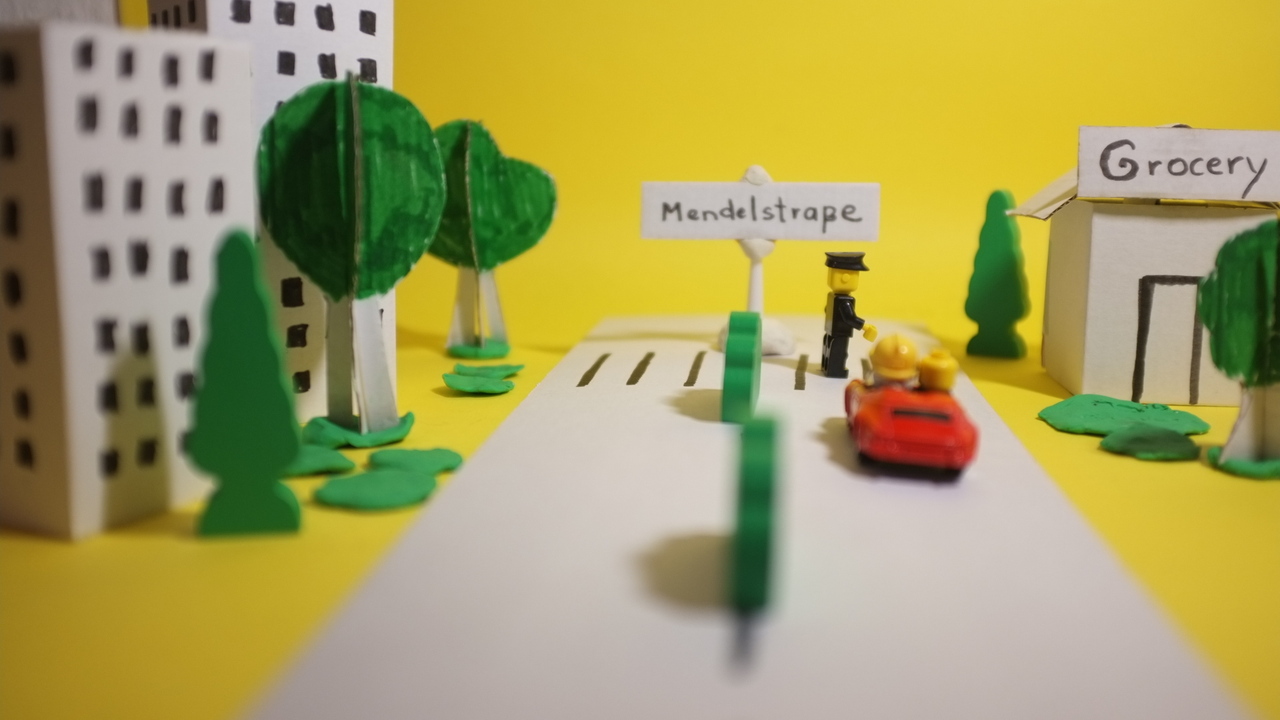 As a preparation for the next 3D project we also had a workshop. In groups we had to build a scene and to take photos of it. Professor Keller has brought us different materials, such as the earth, stones, moss and others. In our group we build a scene of a forest with different characters. It was a very cool and inspiring workshop. After the workshop I also wanted to make my project building a 3D scene. On the “Visual Stories From Future Cities” course already had an idea for the film therefore I have quickly made a storyboard. I suppose that this storyboard need explanations.

Car-sharing
1. The year 2030.
2. Adam is waiting on a parking for a car-sharing car.
3. The car comes and he gets into it as a passenger.
4. Adam harries for his work so they decide to take Berliner street.
5. They are passing by a lot of trees and new beautiful houses, people walking around.
6. Adam is lucky, it took him only 15 minutes to get to his work.
7. Adam wants to know about the same situation in 2015. He puts on his modern time glasses.
8. He is standing on the same parking full of cars looking for his car.
9. He takes the same Berliner street to his work. But it is full of cars. He doesn’t meet any people or trees at all.
10. Adam is very upset.

On a consultation I was given a few important advices - to begin my story from the year 2015 and to try to introduce the flight in time unusual and interesting. The idea of the film is that if we use carsharing cars now, then in the future we will have less traffic jams, more place for parks, new houses, ponds... All that place which is now used for parking. I tried to make all the object for my scene myself from paper and plasticine except the cars. I like the result of my animation also with the music I used for it (The Flaming Lips). However it is a pity that without my explanations the essence isn't clear. 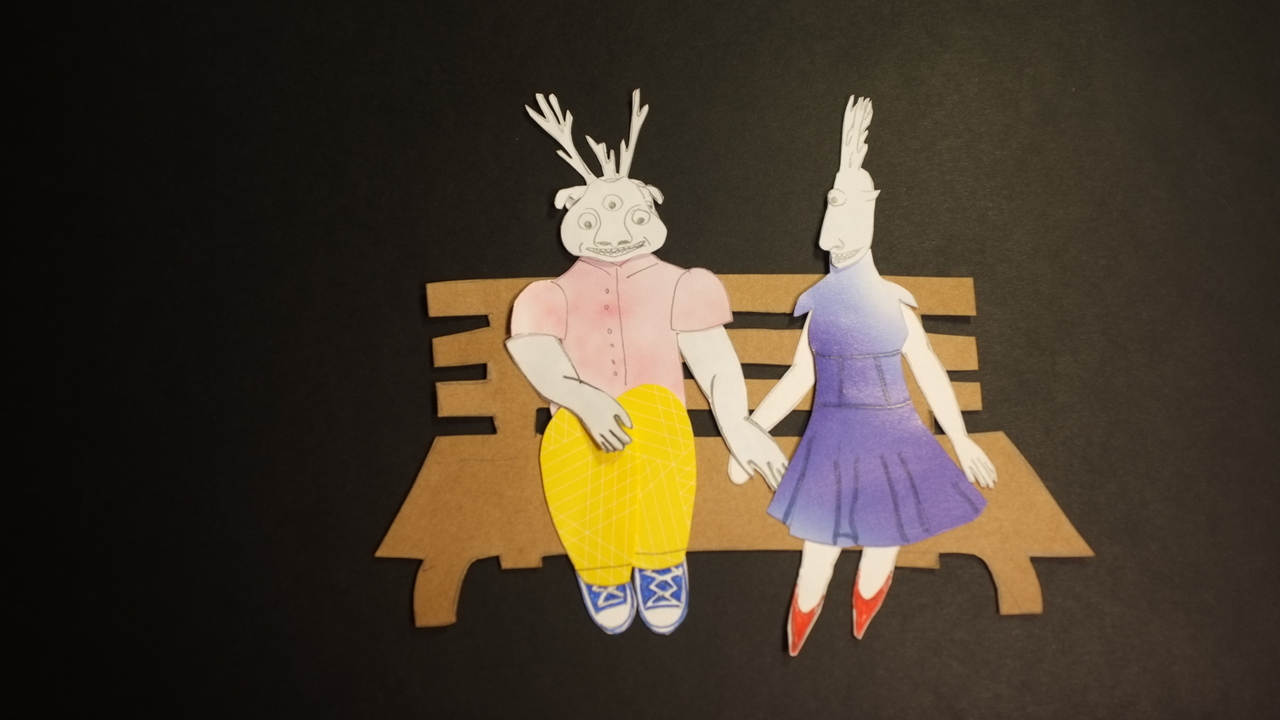 For the final animation we could choose the technique we liked the best. We could make a 2d animation or 3d animation or mix them both. As I earlier wanted to make a cutout animation, I decided use this technique in my last project.

The story has come to mind quickly enough, she has arisen while listening to the song of Cocorosie Tekno Love Song. The main thing was to think up how the characters would look like. I wished for some unusual ones and have drawn several various. Further I made the storyboard and only then I have begun drawing each of characters for the film. I have drawn about 20-25 various faces, various poses (sitting and standing, sideways and rehouse). Then there was a long choice of the background and I have stopped on a black one. On consultation I was given a good advice to attach a background strong to the table. I have attached not only a background, but also a bench on which the characters sit. It helped very much by shooting. For shootings I used two powerful lamps and tweezers. Unfortunately, there were some problems with the light. I think it was because of the black background, it was a bad decision to choose it. Nevertheless I think I got a cute animation with wonderful music.

The course was an exciting experience for me. It was surprising for me how much labour-consuming is process of making a short video. Even though it was hard, the course was great and I liked it. Of course it is a little pity that on projects there was not enough time, I would like to spend at least one of them much more time.

The constant exchange and presenting the works was very inspiring and have made fun. It was cool to realize the mistakes and to try to correct them doing new projects. I am very glad that I have got closer to technology and the different variations of stop motion.