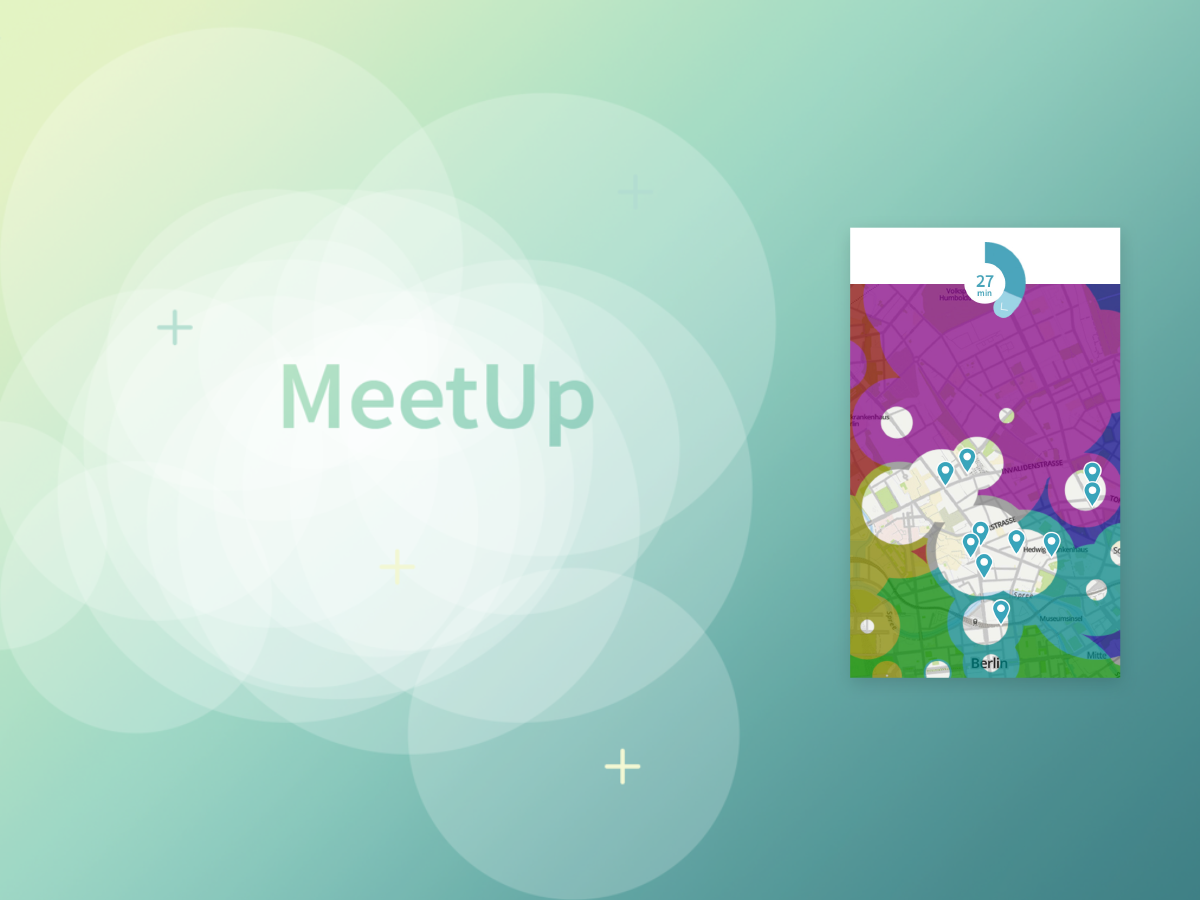 MeetUp is a micro-coordination tool to make spontanious appointments with friends. It automatically finds the right kind of places in areas accessible to all people involved. The project was part of Boris Müller's Map [R]evolution course in collaboration with HERE. It is implemented as a web prototype. 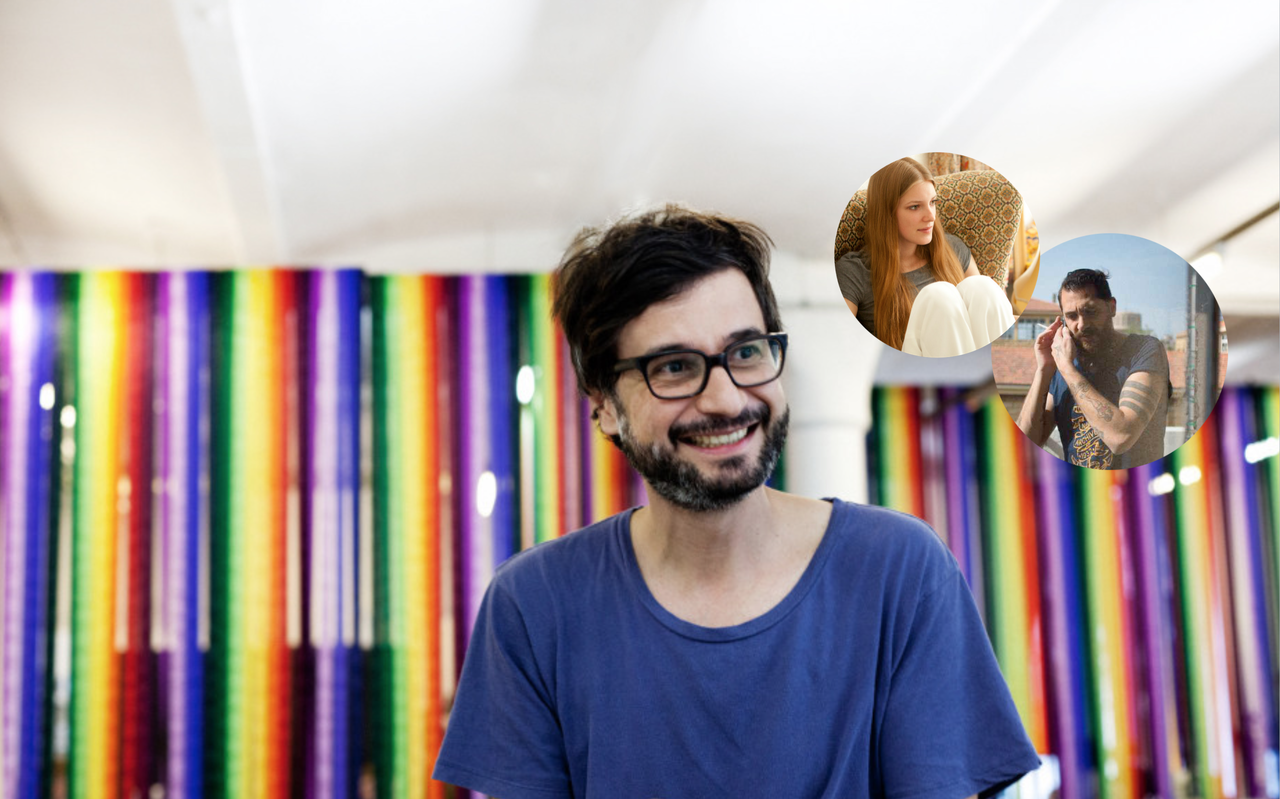 Mario has finished work today.  He wants to have a beer with Amy and Bobby –  wherever they are right now.

What’s an ideal place to meet,  so that everybody gets there at the same time?

Create a tool for Mario

In a model world where everybody moves everywhere at the same pace, a person's radius of movement has a circular shape, and finding the optimal meeting point is trivial. 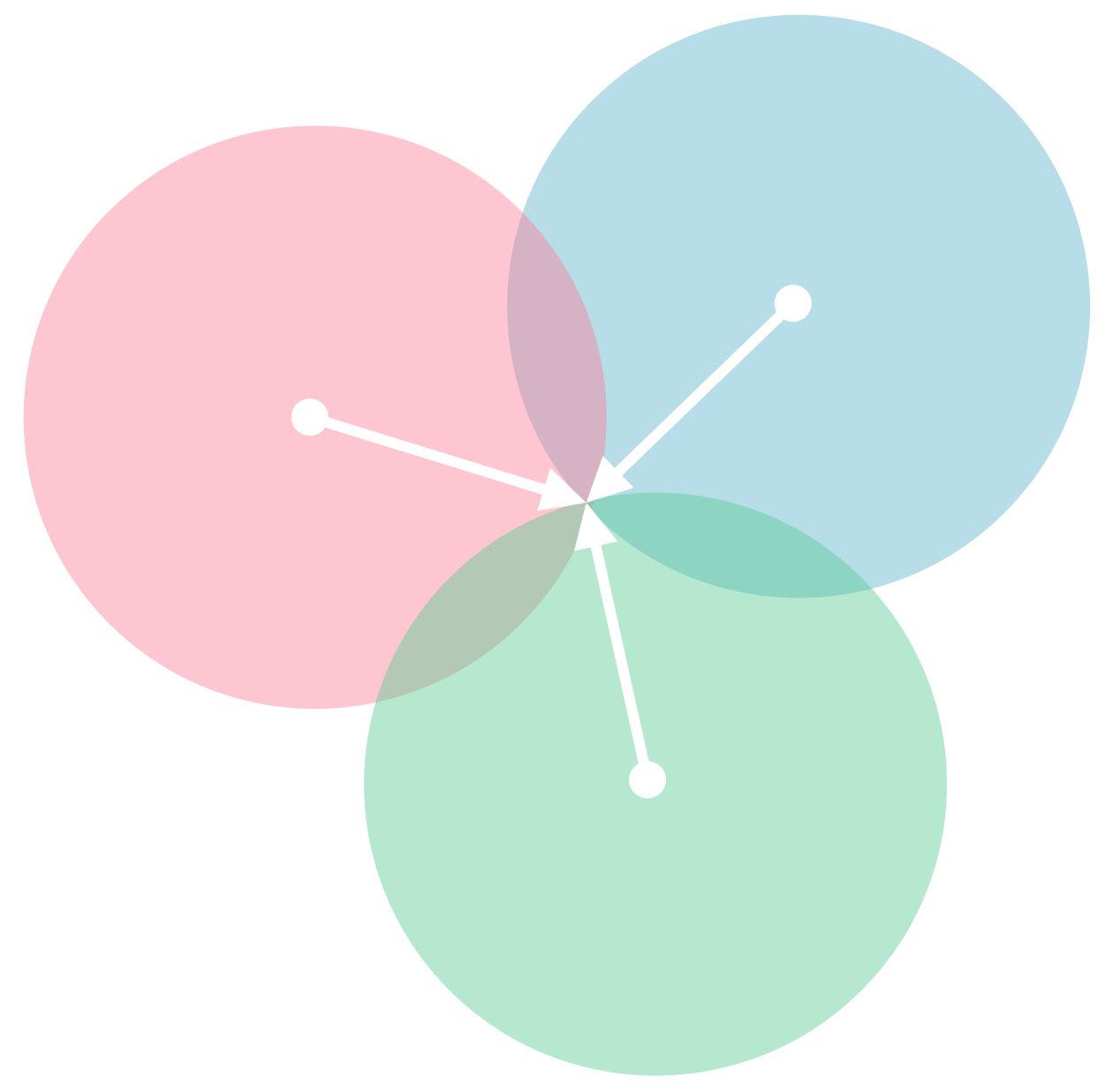 Not so in the real world where people move at varying paces, depending on obstacles and whether they are walking, driving a car, biking, or using public transport.

Now the radius of movement cannot be described by a circle any more. Especially when combining multiple modes like public transport and walking, it can take odd shapes that are not even necessarily connected. Project Mapnificent illustrates this in an interactive map visualisation. 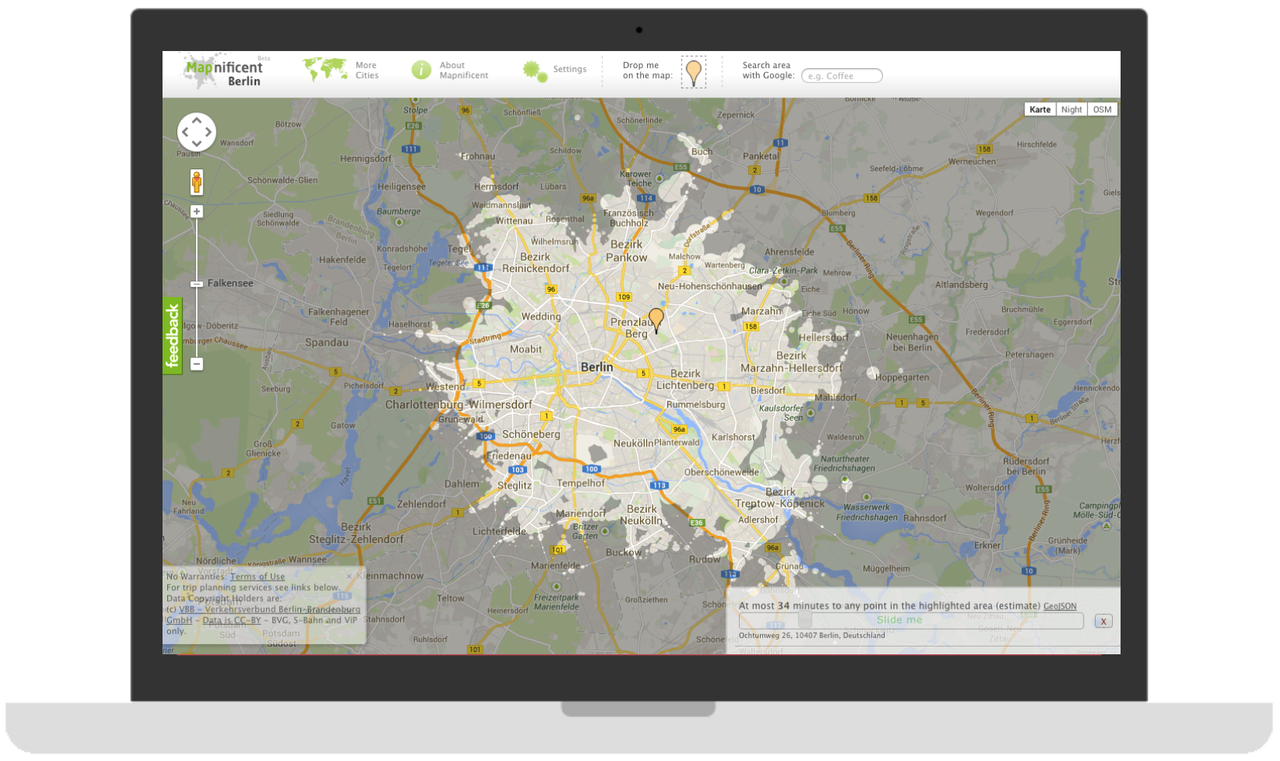 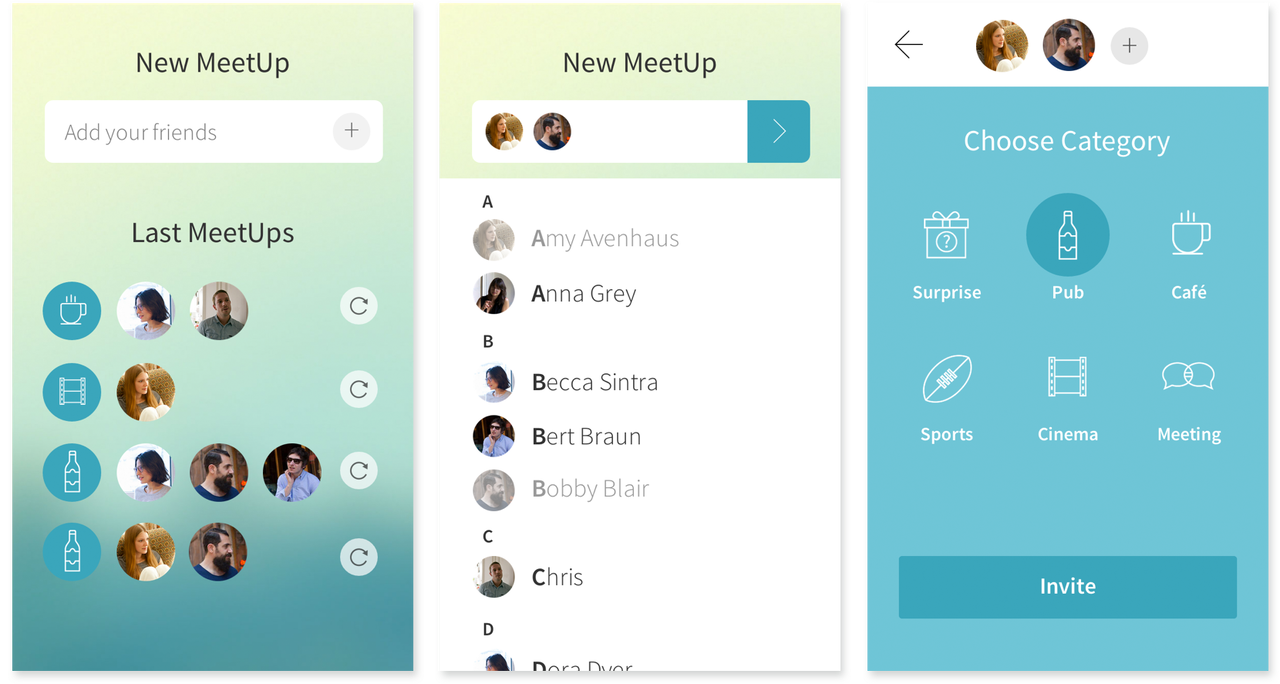 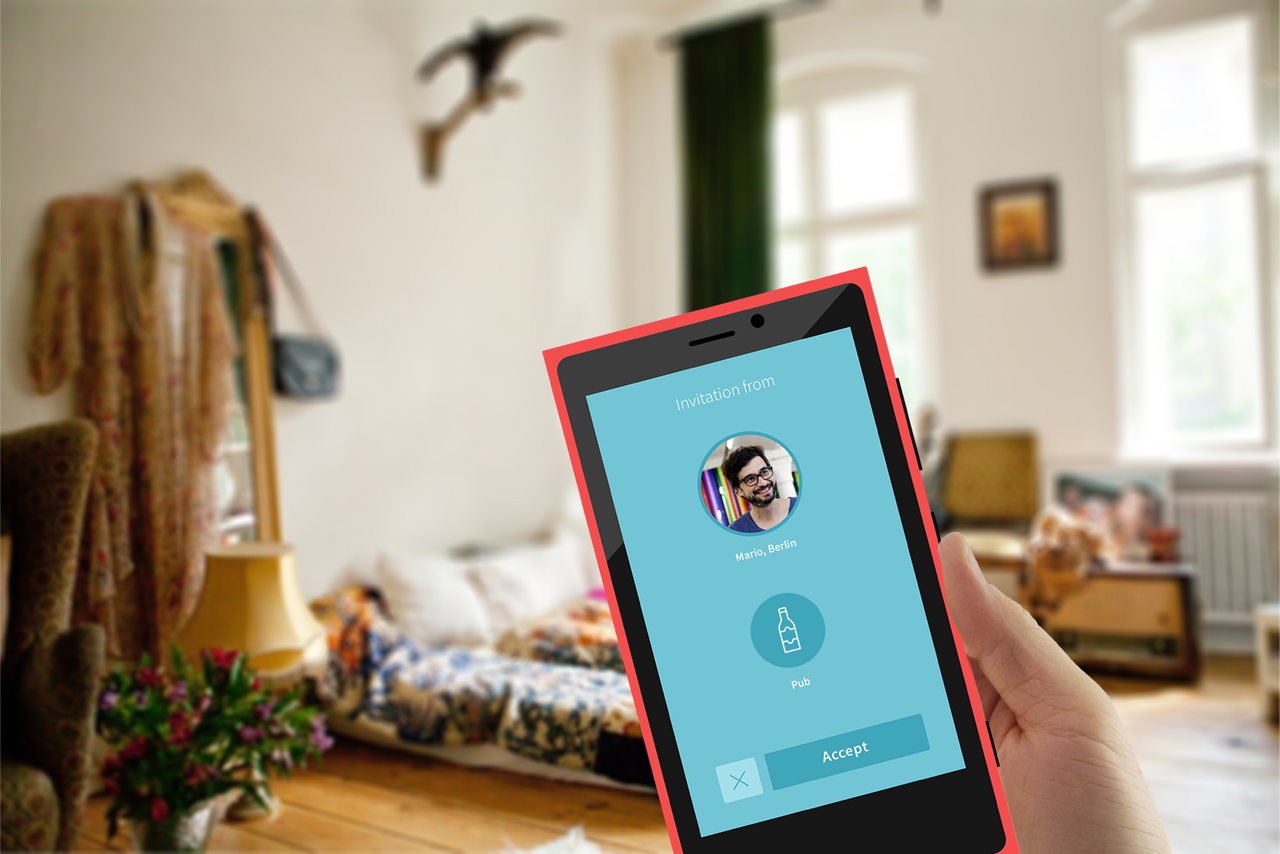 2. Wait for friends to accept.

3. As friends accept, their location is being transmitted. Then everybody's hypothetical radius of movement is equally extended until a meeting area is spotted that hosts a minimum set of suitable points of interest. 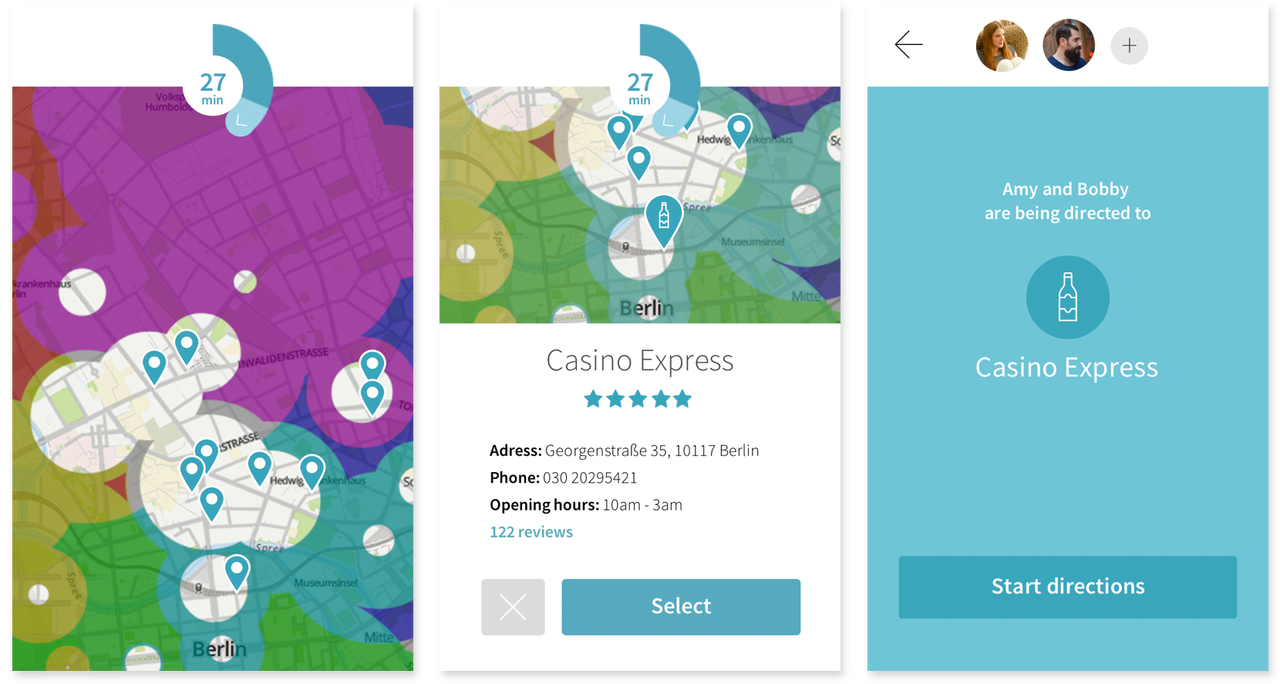 4. Examine the result set and extend the radius of movement if necessary. Select a place, everybody will be directed there. 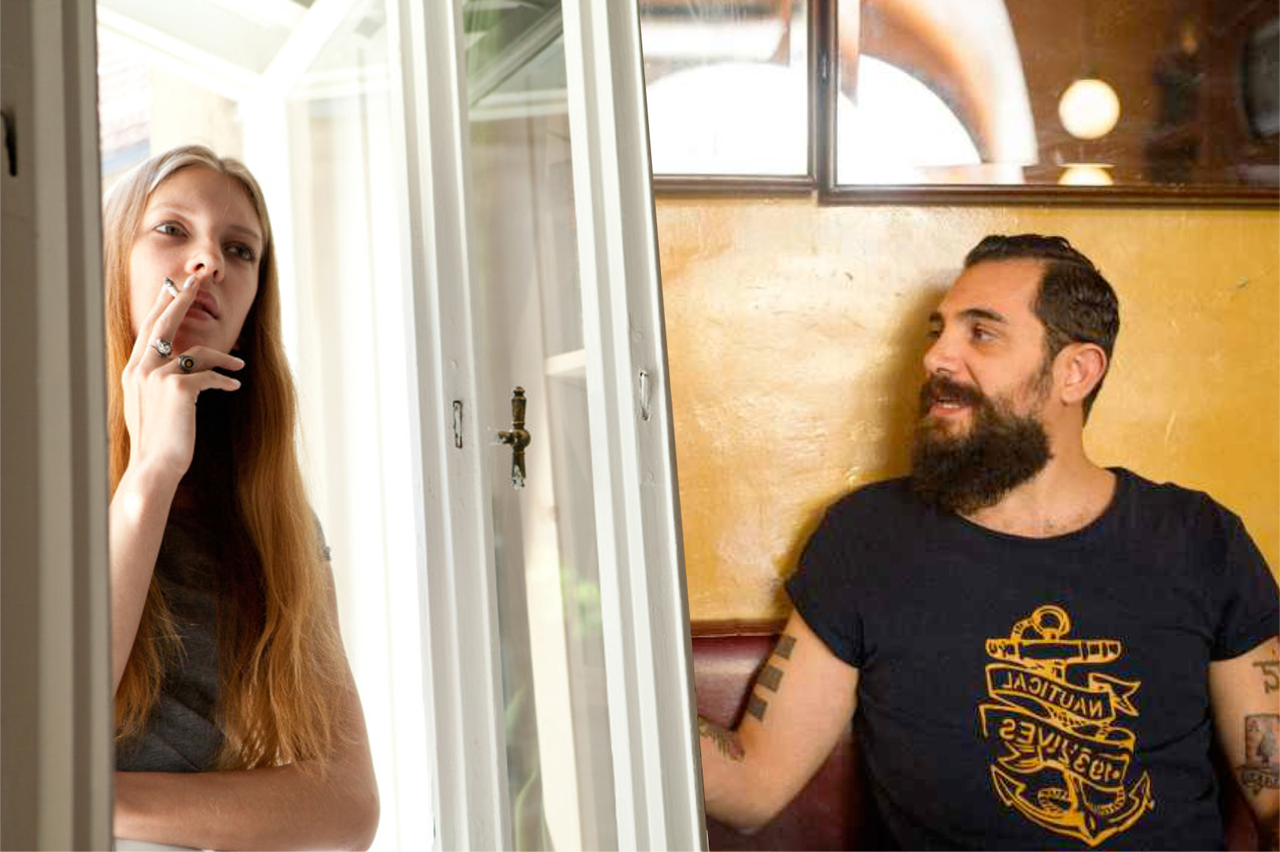 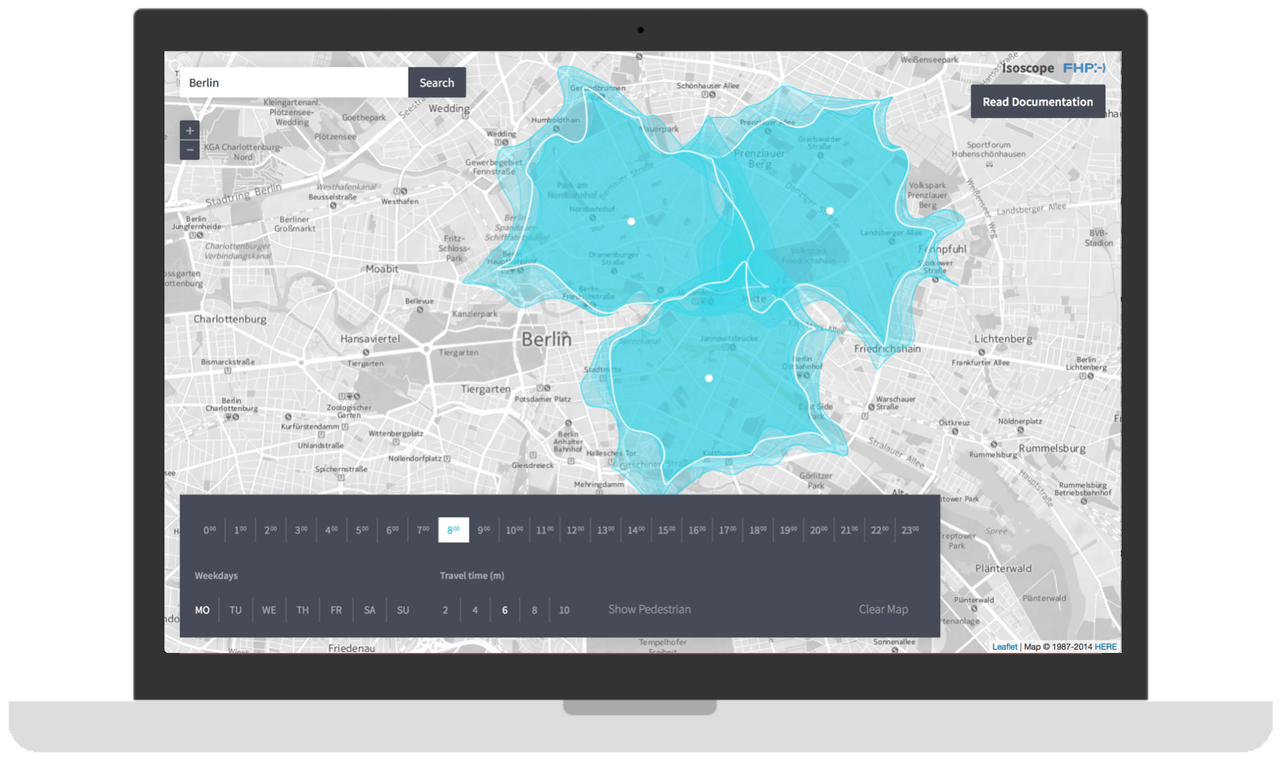 We used HTML5-based prototyping tool Hype to build our prototype all in a WYSIWYG manner, up until we decided to make the animated map visualisation as real as possible. At that point we had to integrate our own Javascript.

The tool's powerful WYSIWYG design and easy Javascript integration served us well, since it helped us with speedy design iterations and did not force us to change tools for the final prototype.

The course objective was to come up with new ideas how to visualize and interact with geographical information beyond traditional map paradigms, and to materialise them into a working prototype.

Due to the dual-leadership nature of the course, the exact objective tended to be work-in-progress at times. Should the result be a map or a service? In retrospect, the controversy about these seemingly incompatible goals turns out to be one more valuable finding of the course, as it forced us to be clear about what we were aiming to do. I also think that this conflict had a positive impact on our resulting prototype MeetUp as it is a service vastly reduced to its essence: an interactive map visualisation.

To focus on exactly this, Boris gave out a recurring, very simple, very plausible slogan that now is a central motive for me as an interface designer: Enable informed decisions.

Overall, the course was an ample aggregation of working tools

combined with a lot of collective research, discussion, and an active exchange of feedback from Boris and the HERE people and between the students.

Consequently, this was one of the best courses I had.