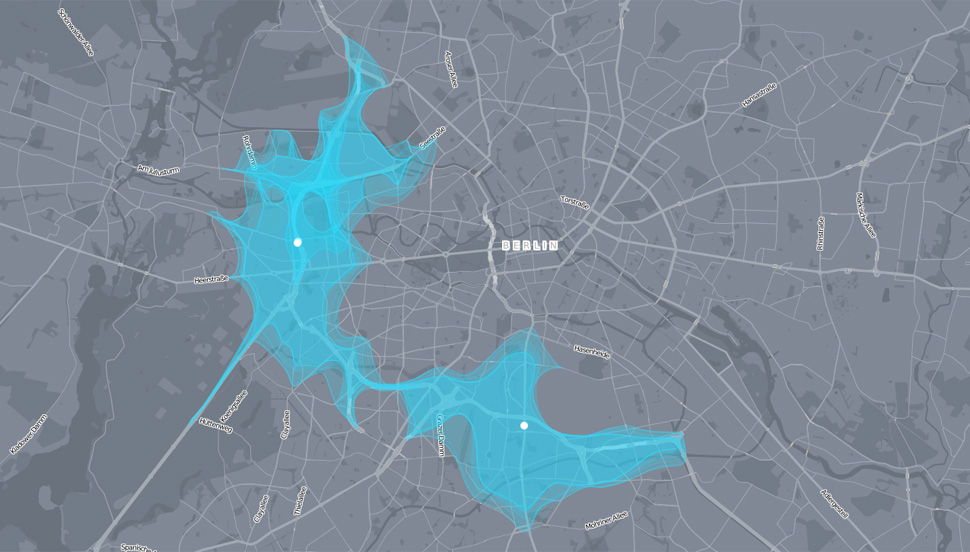 As we think about traffic in cities as somewhat like the pulse of the city, Isoscope is an approach to capture this rhythm with its up and downs. It's an interactive tool that creates aesthetic visuals about locations that are reachable by car in a chosen time from a chosen location. The boundaries of the reachability is shown by 24 layered organic shapes, while one layer represents one hour of the day. The output reveals many information like the traffic infrastructure, connectivity of regions and natural boundaries. Since the location to choose is not exclusive, places all over the world can be explored and compared. 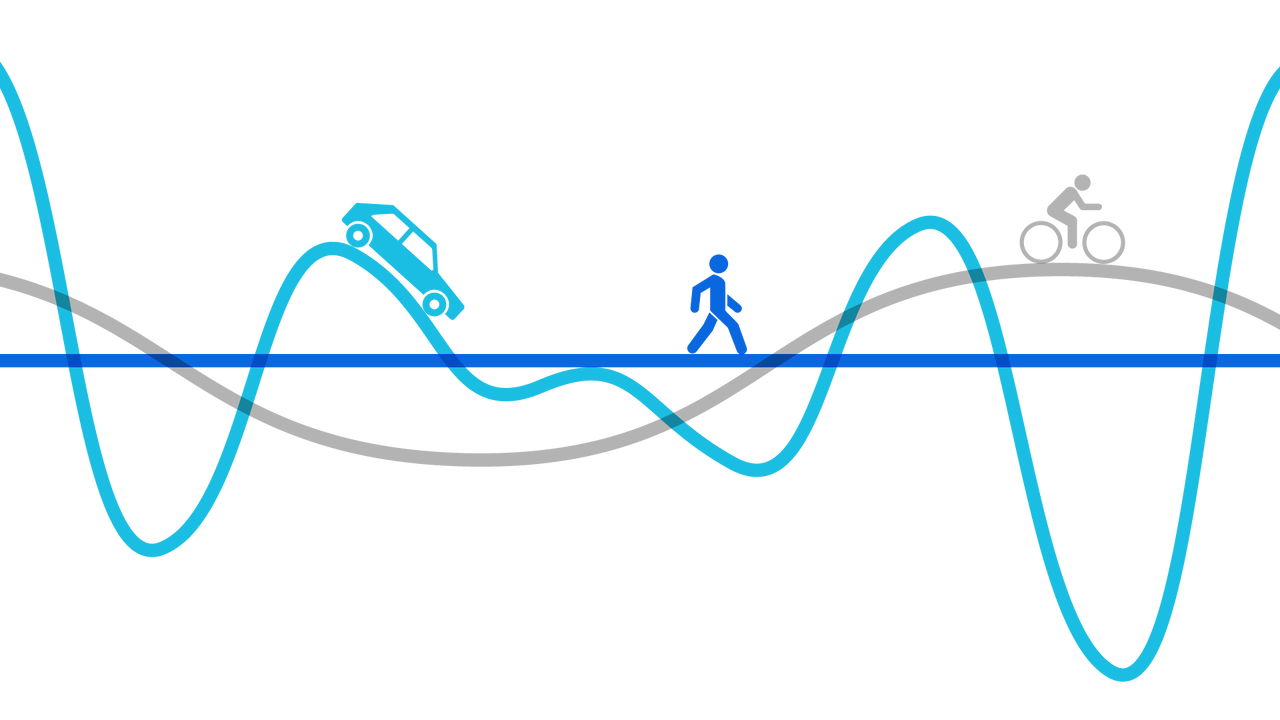 We drive to the closest supermarket, take the bike to the gym or walk to the cafe next door for a nice chat among friends. Getting around — thus mobility — is an essential part of our being. We were especially intrigued by those situations when our mobility is compromised such as in traffic jams or during tough driving conditions. How do those restrictions impact our journeys through the city and who is affected most? Obviously, a car can hardly bypass a traffic jam, whereas a bike is more flexible to continue its journey. Let alone the pedestrian who can stroll wherever he wants to.

Isoscope tries to answer the questions above by comparing different means of transport and their sensitivity for disturbances. 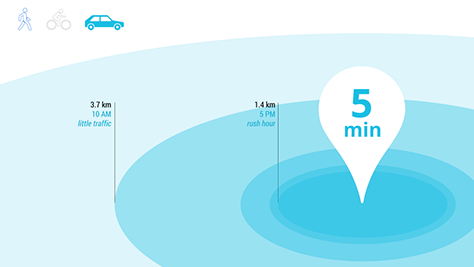 Once you are stuck in bad traffic conditions, you will need more time to cover the planned distance. In other words: stuck in a traffic jam, you will cover a smaller distance in a predefined amount of time.

This is, what Isoscope is about: layered shapes show the area around a chosen location that is reachable within a chosen travel time.

As traffic conditions change throughout the day, there are 24 layered shapes - each representing one hour of the day. 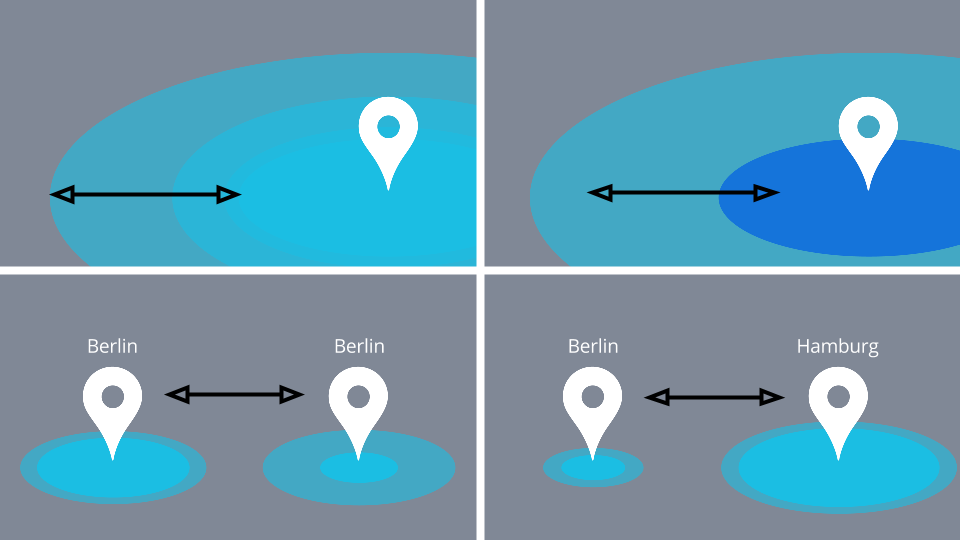 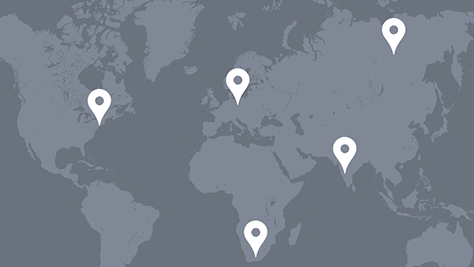 With Isoscope one can easily see and compare the influence of traffic conditions on our mobility or compare the reach of different means of transport. Within or among cities. Worldwide.

The following two projects deal with a similar matter as Isoscope. The first, [Mapnificent by Stefan Wehrmeyer](http://www.mapnificent.net „Mapnificent by Stefan Wehrmeyer“), shows areas one can reach by public transport in a given time. This sounds very familiar to our project. While Mapnificent uses idealistic time-table data to compute the reachable area, Isoscope takes real-time and historic traffic data into account. In addition, Isoscope is applicable worldwide whereas Mapnificent is available for major cities only. 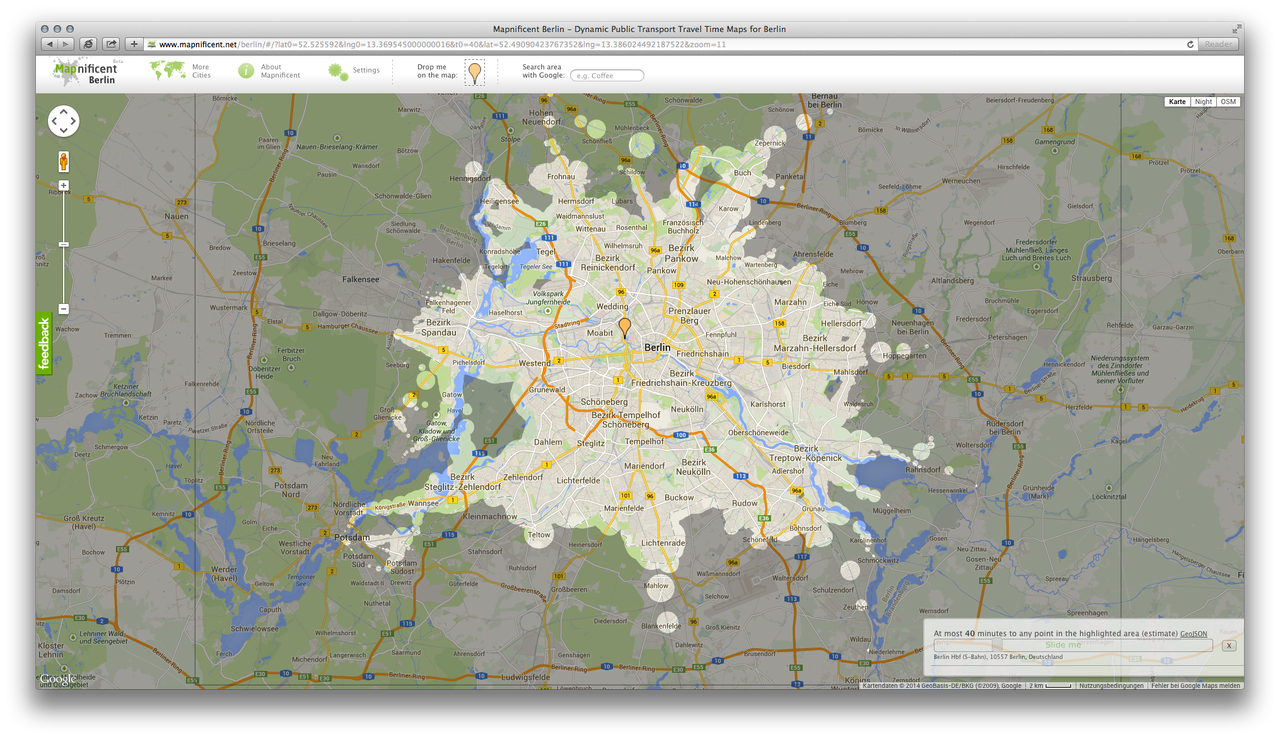 One second project, [Public Transit Travel Time by Andrew Hardin](http://geoss.colorado.edu/traveltime/ „Public Transit Travel Time“), uses a heatmap to show transit travel times in 8 major US cities. As it is true for Mapnificent, Andrew Hardin's work uses planned public transit data and its scope is limited to selected US cities only. While the current project shows ten different areas reachable within 10 to 120 minutes, Isoscope focuses on one specific travel time revealing deviations in the reachable area due to changes in traffic conditions. 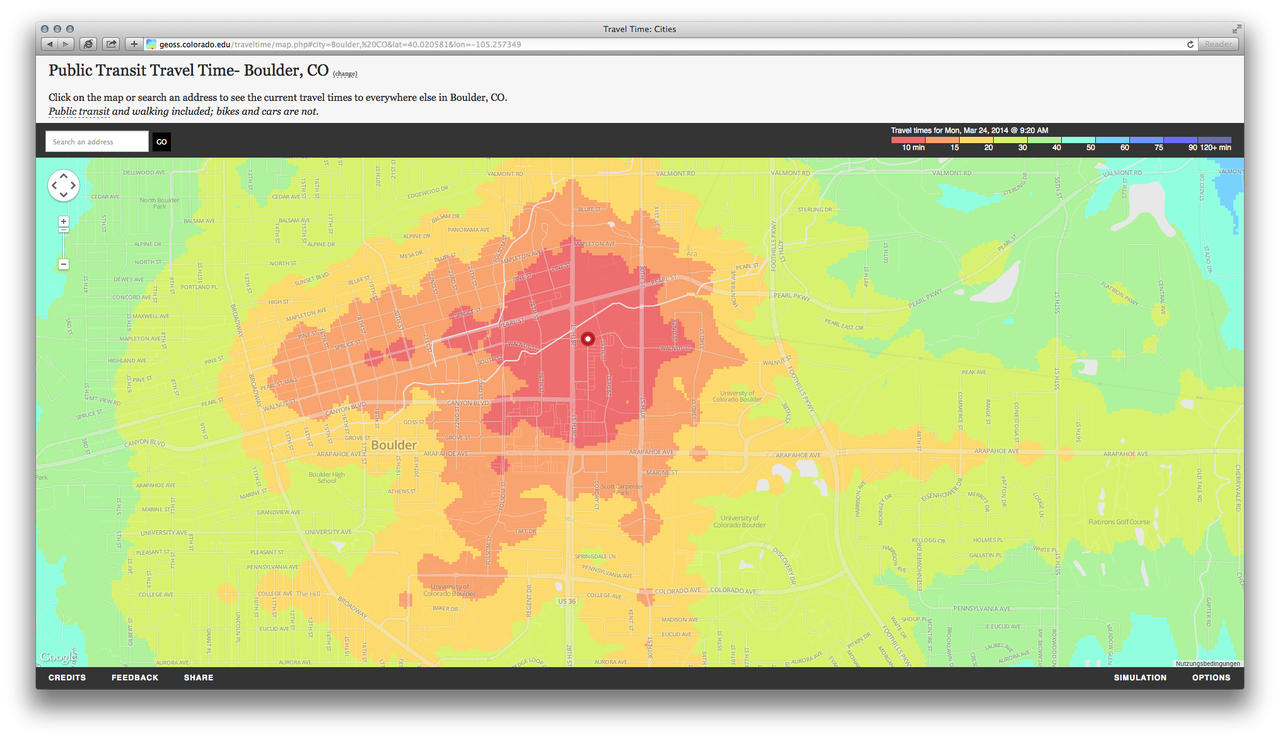 From initial sketches and scribbles to a running interactive prototype. 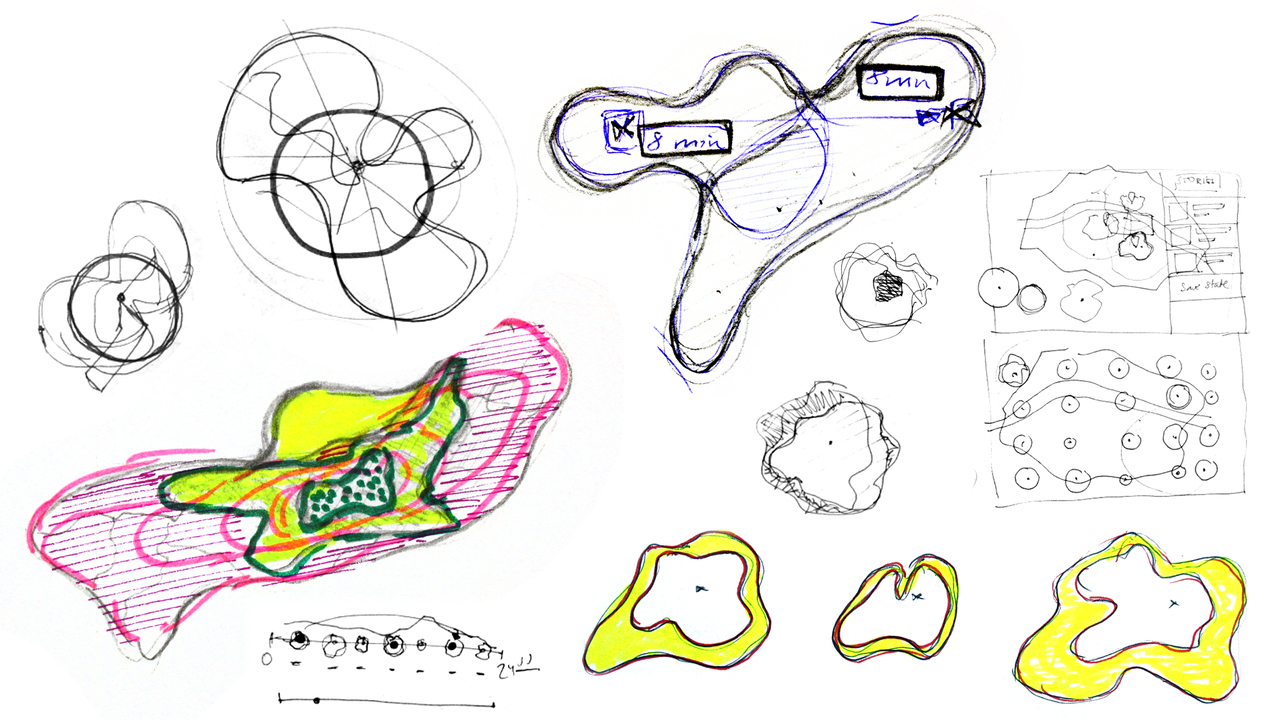 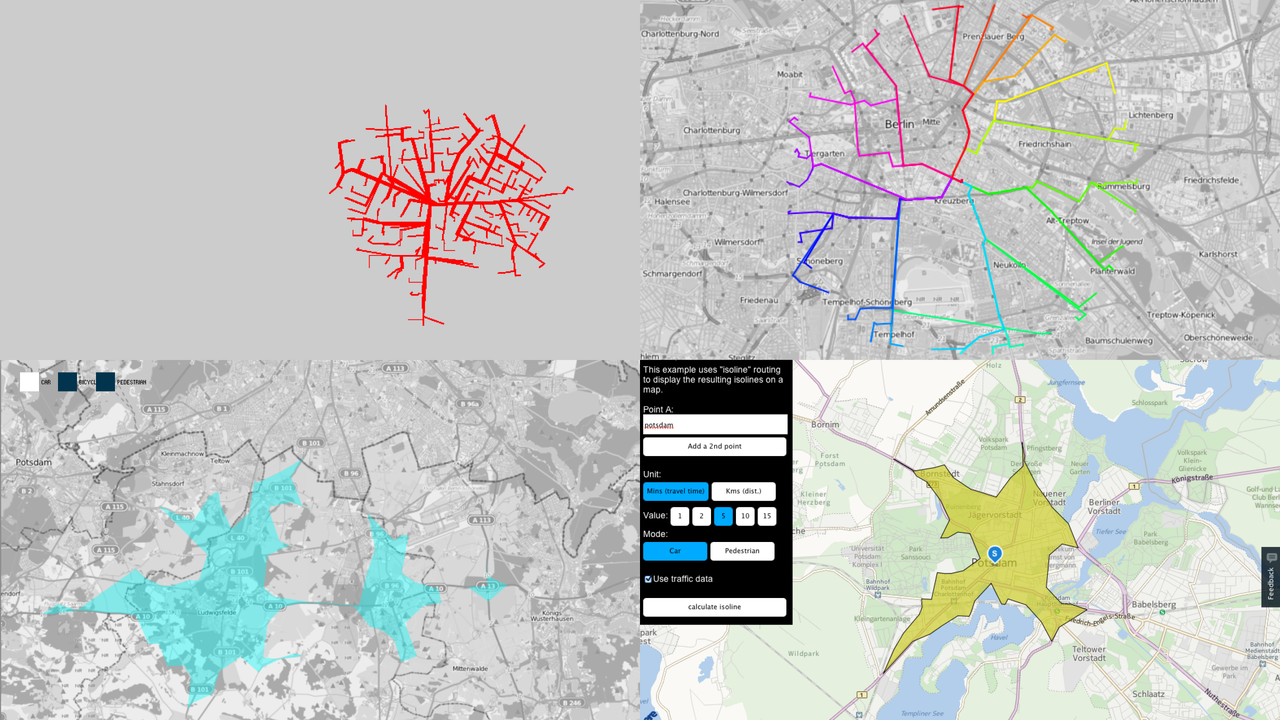 As we advanced in the ideation of Isoscope and agreed on some kind of organic shapes representing our „mobility scope“, we made our first programming steps in Processing using the [HERE API](https://developer.here.com/ „HERE API“). Initially, we tried to calculate all possible routes from a given location within a specific time. Only afterwards we came across the HERE Isoline API that calculates areas reachable within a given time automatically.

Since we wanted Isoscope to be platform-independent, we changed the programming environment from Processing to JavaScript. Several iterations regarding the look of the shapes, map style and UI elements and functionality finally led to Isoscope V 1.0. 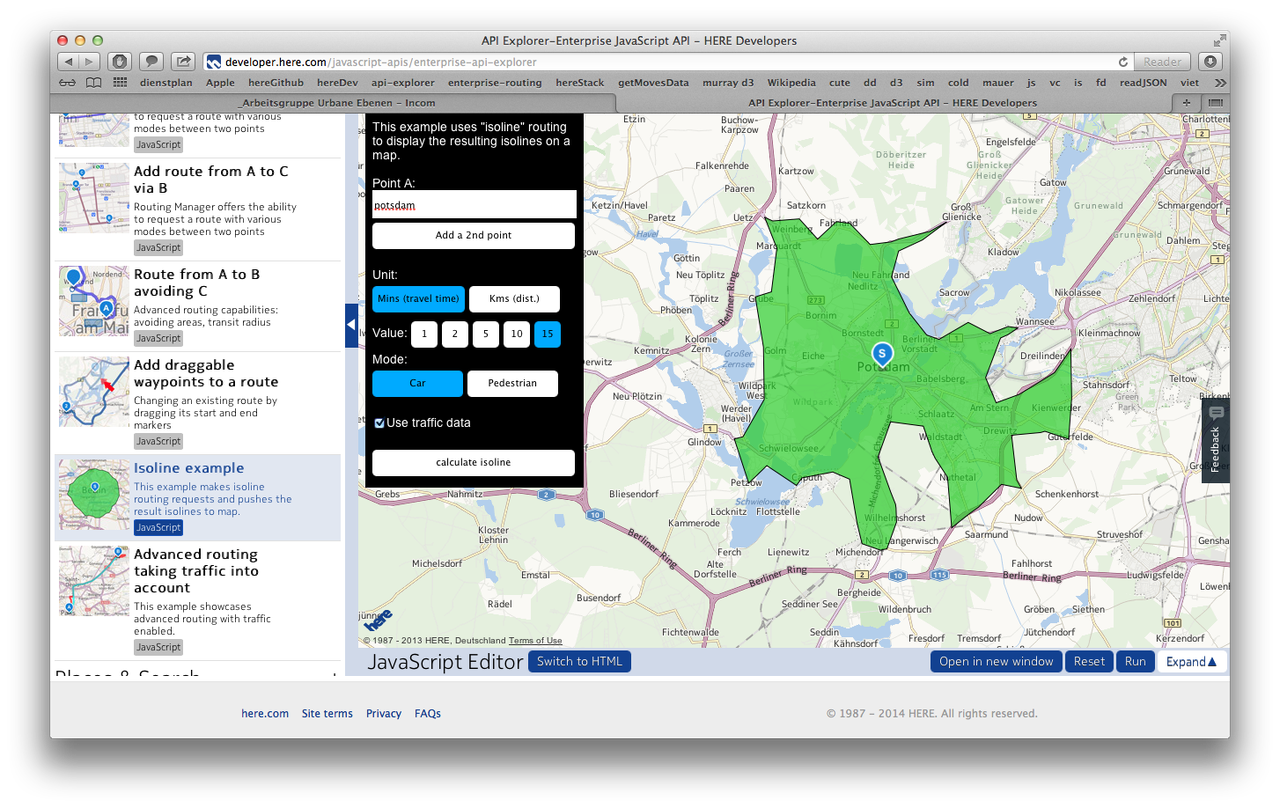 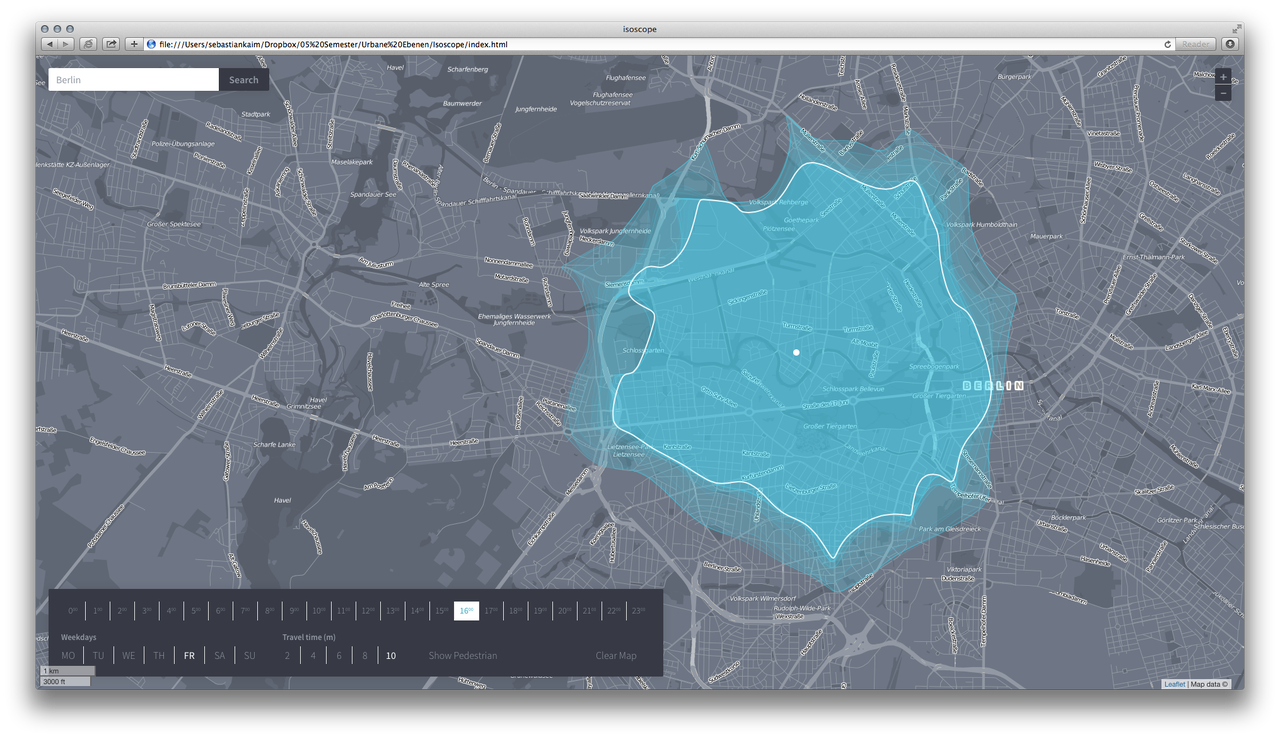 [Go ahead and check your home town, favorite spot or any other place on the globe: Explore Isoscope!](http://www.flaviogortana.com/isoscope „Isoscope“) 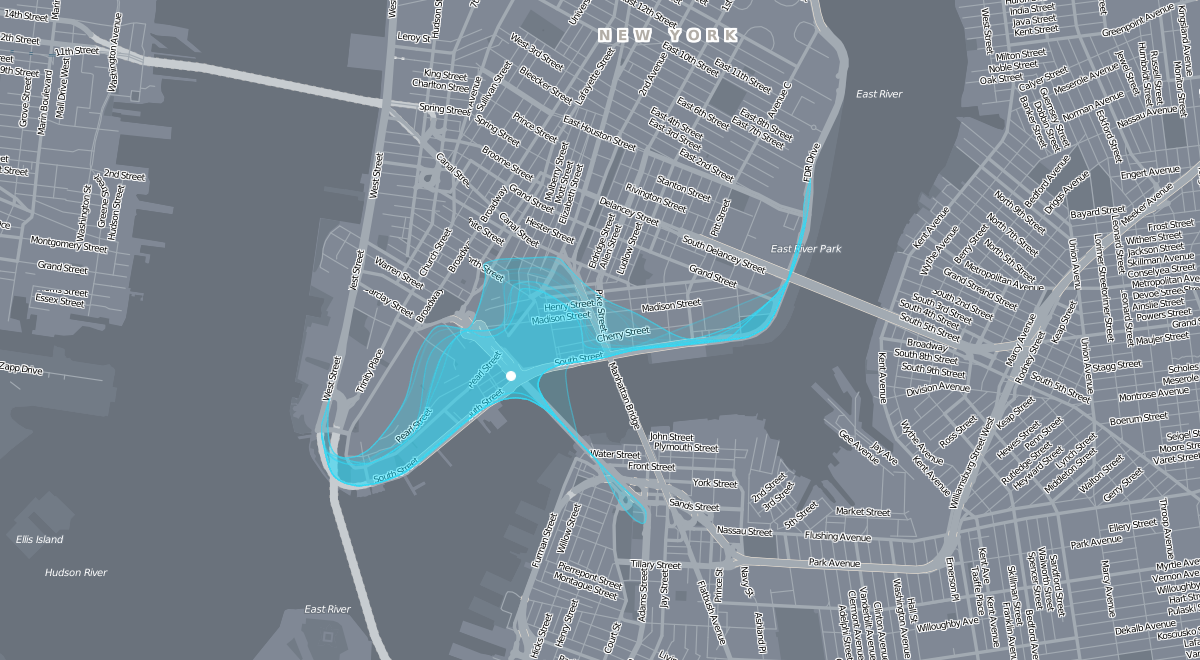 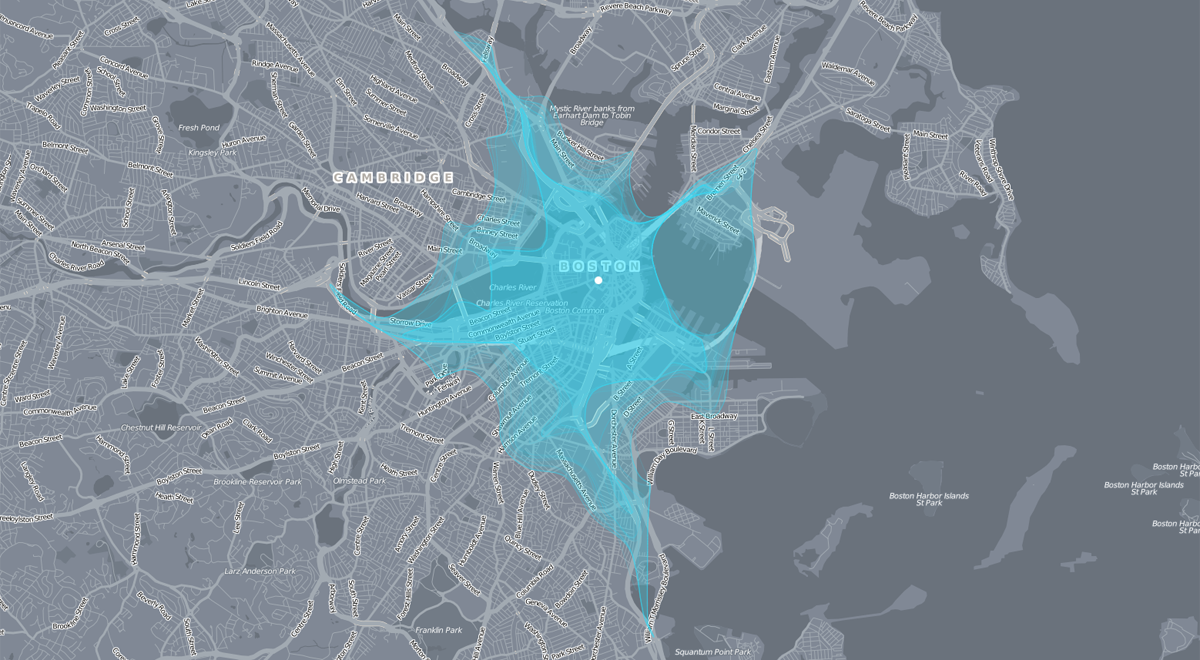 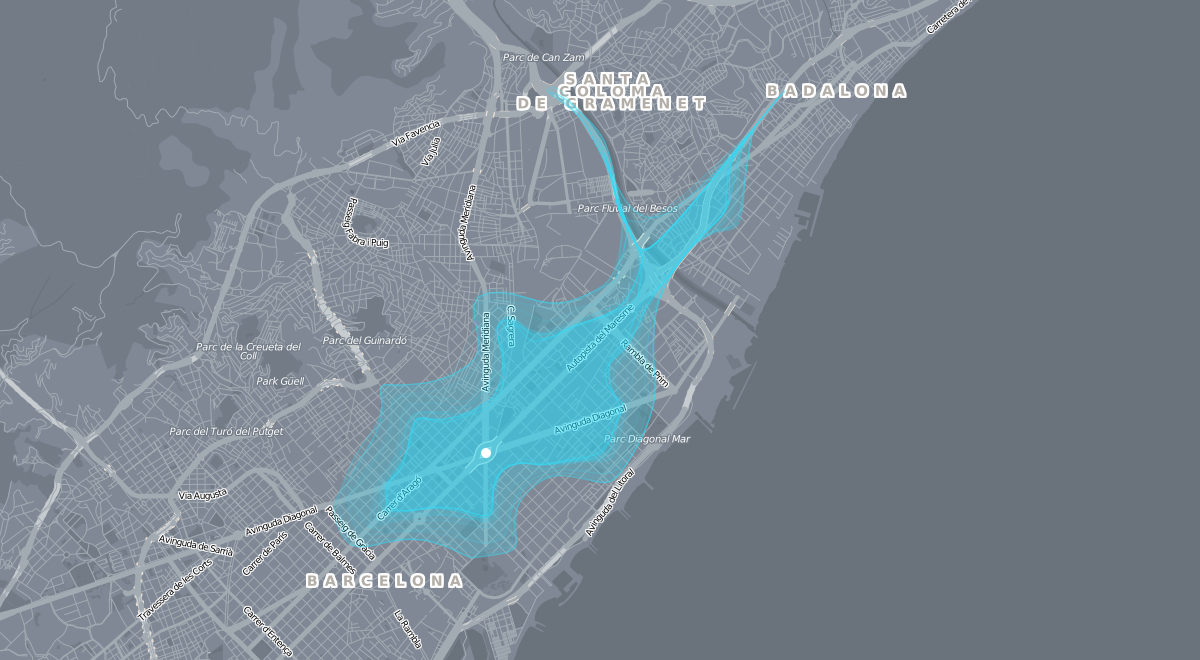 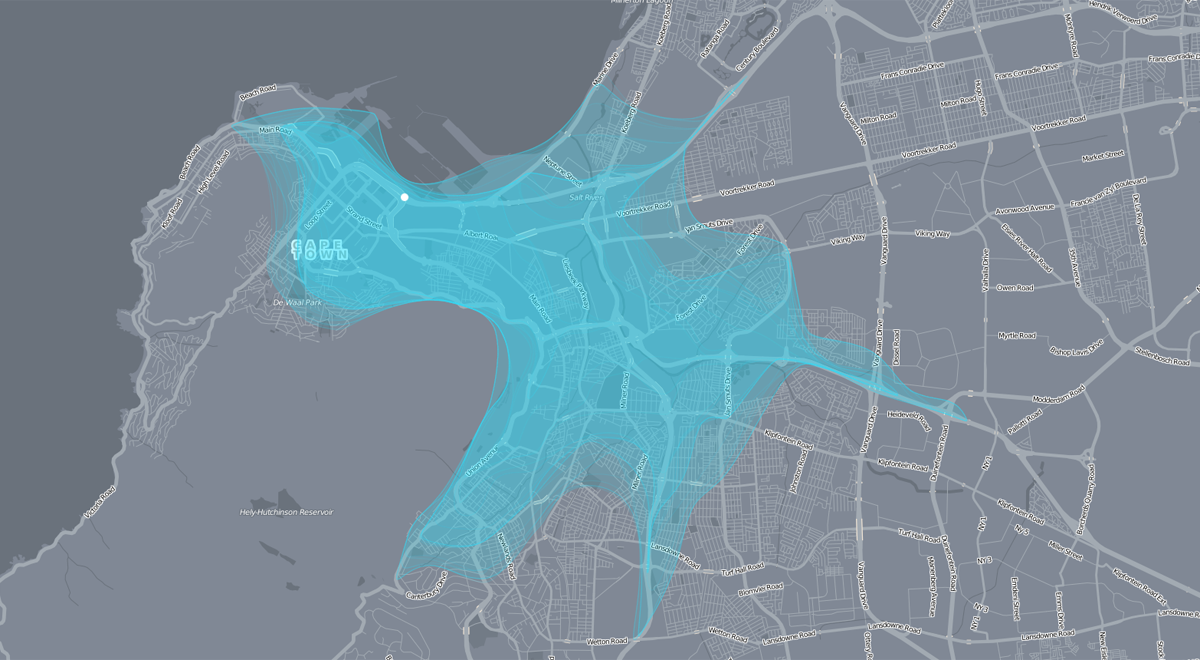 Playing around with Isoscope, you will soon realize the different characters of the organic shapes according to the city's traffic infrastructure (e.g. density, road quality) or natural boundaries. No city equals another which led us to the idea of an Isoscope-ID:

A grid of Isoscope-shapes is applied on an urban area. Reducing the shapes to their minimum and maximum dimensions results in a grid of organic ring-like shapes. Once converted into circles of different width, you'll get a unique identifier of the covered area: the Isoscope-ID like the following one for Los Angeles. 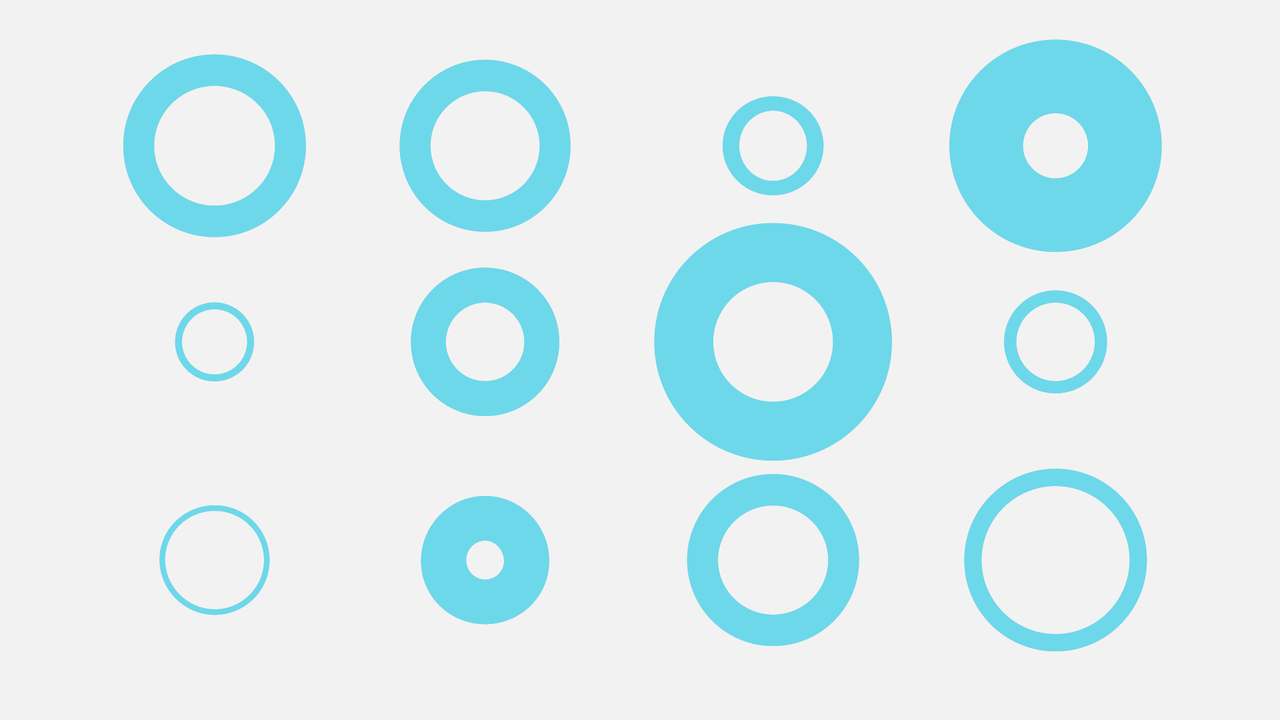 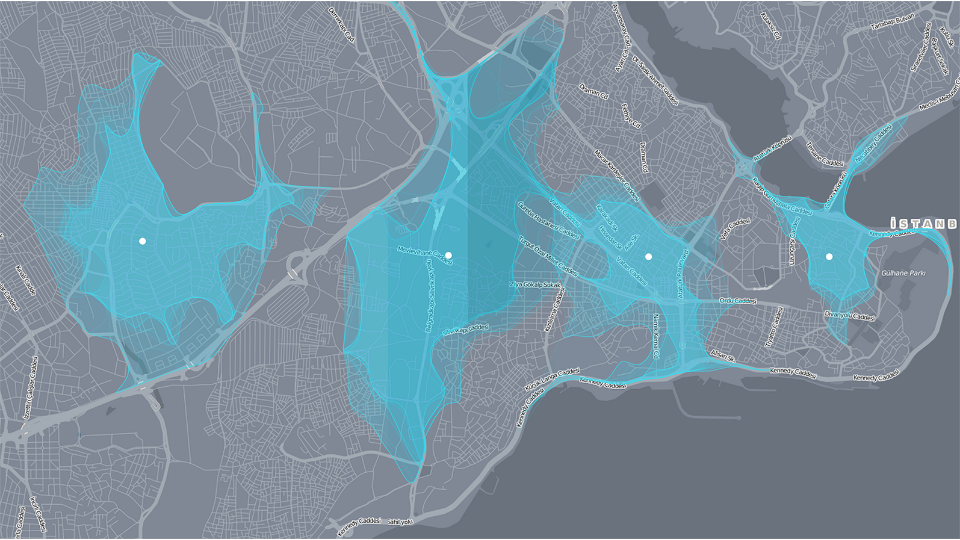 Besides the integration of new features we are considering to smooth the interaction of scrolling through time by adding animation. On the one hand this would increase the user experience and on the other hand this would enable a nearly stepless morphing of the outlines.

Furtermore, the possibility to compare cities or areas needs some more attention, since for the moment this is only doable by making and comparing screenshots. The integration of something like a split screen mode could be useful in this case.

Even though we haven't still finished all of our intentions, there is already a whole world to explore with Isoscope. So happy exploring! 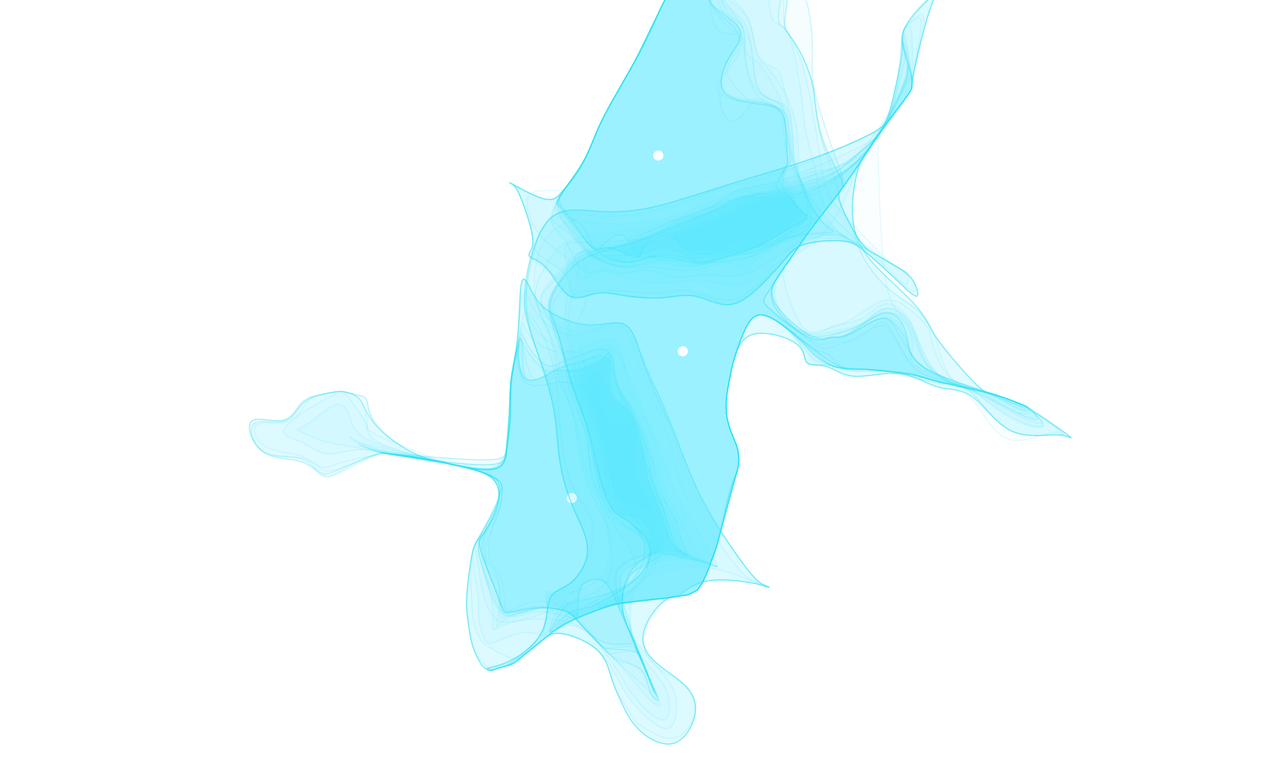