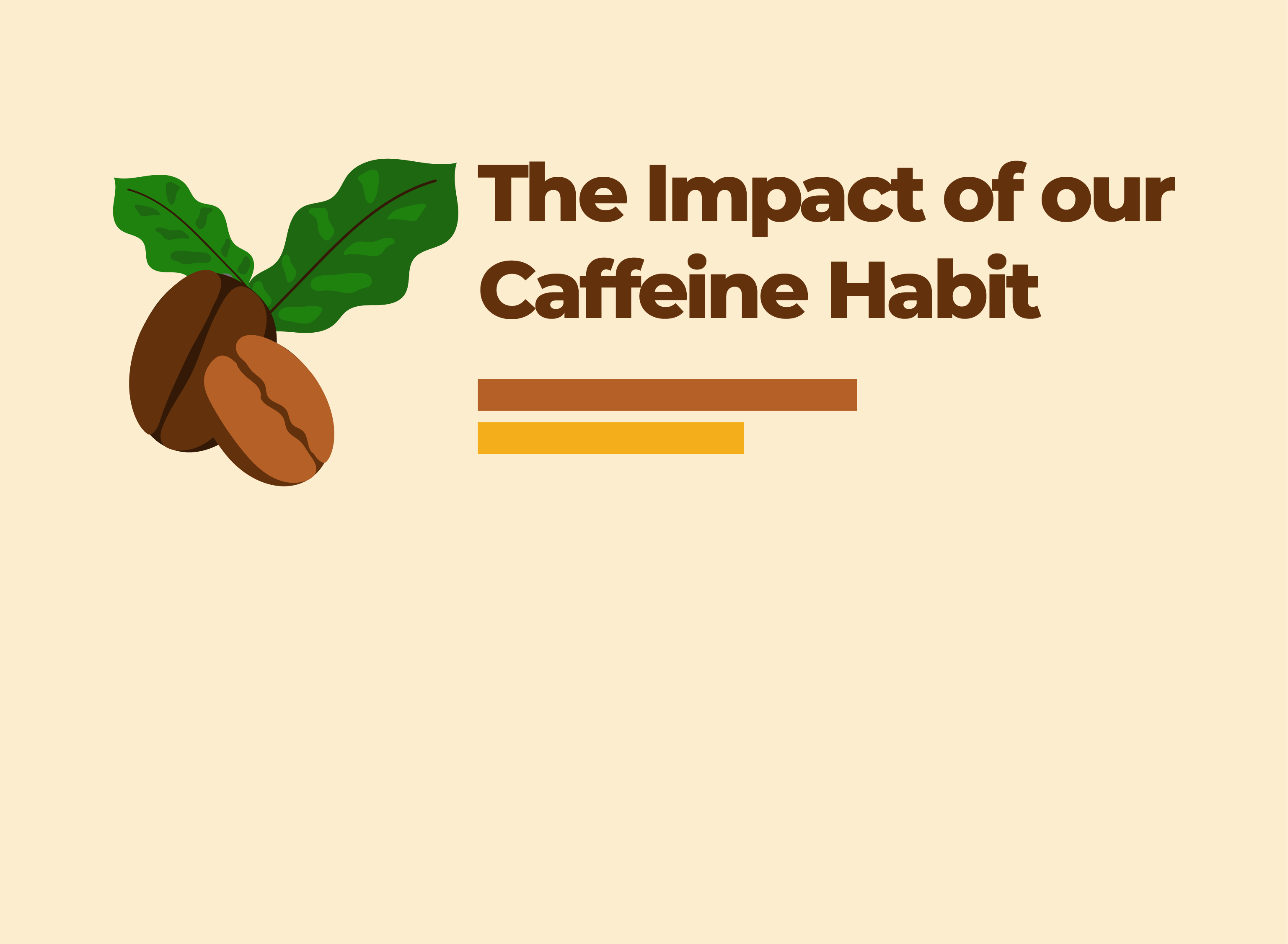 The Impact of our Caffeine Habit

In Myriel 's lesson Relational Landscape, we need to find a boundary object to relate two completely independent geographical locations, and the connection point can be culture, natural landscape, or economy, history, environmental protection, etc. Two Geographical locations in this class we chose Germany and South America. Because this course is hosted by teachers from Germany and South America.

After a few rounds of brainstorming and idea searching process, I chose coffee as my boundary object. Coffee consumption has a very long tradition in Europe. Coffee is not just a beverage for Europe but already a way of lifestyle and culture. For South America, coffee is a very important cash crop. For example, in Brazil, the coffee economy is an important part of the national economy, and the position of coffee in Brazil is even more important than that of gold and sugar. In 1891 coffee consisted of 63% of the country's exports. The coffee industry is spread across 13 states in Brazil, with about 300,000 coffee plantations spread across 1,950 cities. Germany has the largest coffee consumption in Europe and therefore is an important customer for South America's coffee plantations. Will German coffee consumption have a subtle influence on coffee plantations in South America? What coffee we drink might decide the fate of the birds and insects living in the coffee plantations? Will the price of thel instant coffee package in the supermarket somehow affect the income of the farmers who take care of these plantations? With this question in mind, I searched a lot of information, including the coffee trade process, the coffee planting process, the wages of the labourers in the coffee plantation, the soil conditions in the coffee growing area, and the report on species diversity in the last decades. In order to find the changes in South America, I also used Google Maps to search for satellite photos of coffee plantation areas. I wanted to see if our coffee consumption is affecting the deforestation of the coffee planting areas in South America. During this process, I gained a lot of unexpected knowledge, such as the types of coffee, the coffee growing process, how coffee came to Europe, etc. I also encountered many difficulties. For example, when I tried to collect and compare satellite images of coffee plantations in Brazil from 1960-2021, due to the low resolution of satellite images in the early years, it was difficult to see if there was deforestation in these years. And also, I can see a lot of trees in these areas, but I can not tell which kind of trees it is(if it’s coffee trees or forest). Besides, I wanted to find a report about biodiversity in growing areas 1960 to 2020, but it did not work out. 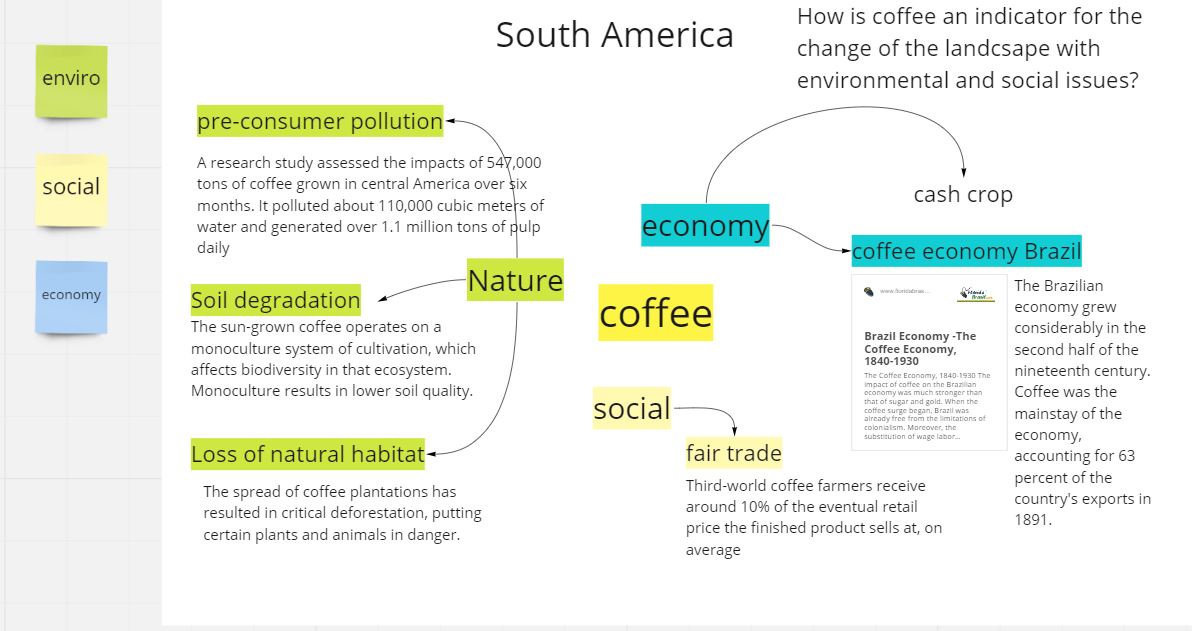 There are millions of stories about coffee on the internet, which one is the suitable material for my infographic?

After searching for so much information, I built a collection folder for all the topics that I found interesting. I started to think about which of them are related to each other and how to combine them into a interesting story. Of course, I first need to find an purpose for my story. I searched many infographics and try to find out the aim behind it: some are for commercial purpose, some are for educational. So I started to think about what kind of story I wanted to tell. I think a lot of the infographics I've collected have very attractive topics and beautiful illustrations, but their content is just some quick facts or datas. I want to do something more, not just a data soup or simple history facts. I don't just want to be an encyclopaedia of different coffee beans. Also, I do not want to do a timeline based report on the development process of coffee planting history in South America. And I also find the economic data of coffee consumption in Germany is boring. My purpose it not to show people how much money we've spent on this beverage, nor how do coffee farmers in south america grow coffee. I want to show something more, something like „what kind of effect our coffee habit might have on the third world coffee producing countries “? I hope to do some thought-provoking content, some content that will cause readers to reflect. I want my readers to understand what their influence their consumption habitat might have on other countries and why it is important. After throwing a lot of ideas into my dustbin, there is one idea that survived: sustainable development and consumption with consciousness. My readers are German consumers. I want to tell them a story behind consumption, I want to show that our consumption in Germany may cause some ecological changes and ecological consequences in South America, and advocate the concept of conscious consumption. I want my story to have environmental value and educational value. However, it is not easy to collect the material for this story. Most of the information on the Internet on coffee topic is about how to brew good coffee and where to buy good coffee beans. Most of the links are commercial links, they just led you to the coffee online shop of the producer. There is tons of information about where to buy good coffee(all online shops say they have the best coffee in the world). There are also a lot of forums introduce the types of coffee beans, the characteristics of coffee beans in various countries, and also some article written by professional coffee brewers about how to roast coffee. But there are really very few articles about sustainable agriculture and the effects of coffee growing. I've been poking around on the Internet for a long time, and just found nothing. Probably the coffee industry just has no huge damage to the environment? I thought. But if we are going to grow coffee, does it mean we need to cut off the trees? Probably coffee growing has cause some deforestation? So I started to search for the possible connection between coffee growing and deforestation, and luckily there is indeed some connection, and more material for my story comes gradually out of the surface. „I finally found some directions!“I was very glad when I realised this.

My first draft wants to tell a story about the pollution of the coffee industry .I wanted to show what kind of pollution our coffee consumption can cause. After doing research I found that our coffee consumption can have some impacts on the environment, just like most agriculture branches. The ecological effects that coffee growing may have include: soil pollution, plastic pollution (such as disposable coffee cups), caffeine pollution (caffeine is toxic for some fish). So I sorted out these effects and I wanted to make a data-driven infographic. Then I started to search for an infographic under the environmental protection topic. In this process, I saw an infographic with the topic plastic pollution. I found it really realistic and scientific, it demonstrates the core idea really well: each graphic and data is telling the readers clearly „how severe this problem is“ and „we really should pay attention to this“. Probably I can do the same story about coffee, also to tell the reader some information like „how much pollution our coffee habit has caused“. So I started to follow this idea, and under this core idea I finished my first draft. I did some sketches on paper and then sketched again in Indesign. When the draft was done, I realised I don't like my idea at all. My work just looks very dry and boring. It looks like a dry data soup, without any soul or character. Besides, what kind of information do I want to communicate with my readers with this datas? Do I want to persuade them to give up drinking coffee because it has a bad influence on our planet? No, that is not my purpose. Not all the coffee growing is environmentally damaging and besides, coffee is not just an agricultural product. Same, the coffee industry is not just about money, pollution, and damage. One thing I am sure about is, I have to discard this draft and start from scratch again. But start from where and research about what? I am stuck. At the beginning I really didn't have any good ideas, I still needed to do something, even though it might not lead to the results I want. Coincidently, I saw some infographics in historical topic during this time such as the European slave trade, or life on a boat. These historical story infographics have attractive themes with delicate illustrations, simple and clean storylines and text. They immediately inspired me about my direction. „I can also tell a story about coffee from a cultural perspective, with some poetic narrative.“ I think. My first idea is to demonstrate the landscape of the coffee producing countries from nature, social, culture, population, and also show some interesting coffee consumption facts in Germany. But unfortunately I haven't found the suitable image material for this idea. I tried to find some hand drawing, exotic illustrations about South America, but it didn't work out.

The idea of the „landscape of coffee producing countries” has not really worked out, so I have to search for a new topic again. I reread all the articles that I've collected and try to find some new ideas. I came across the word “shade-grown" coffee in one article. It is the traditional way to grow coffee and it is very eco friendly. I found this topic is really interesting and also easy to find the illustrations for. After discarding so many draft ideas, there is actually not too much time left for the project, so I decided to pick up this topic.

First thing I start to do is to compile different articles into a story. A story about coffee consumption, coffee growing, and in the end some avocation about buying shadow-grown coffee. I use OneNote and rewrited collected articles to short paragraphs.

I've spent some time deciding which content to show and which to discard. I not only want to show the ecological pollution caused by coffee planting, but also quick facts about coffee plantations in South America. I want to show that the coffee industry does have an impact on our environment, but if we buy shade-grown coffee we can avoid this. Also, I want to show we have a huge coffee consumption and we are actually responsible for the environmental damage in our coffee producing countries. I decided my storyline very soon this time and fortunately I also found my desired illustration material very soon: some beautiful idyllic scenes and a nice brown-skin farmer. I write, then I rewrite, I have kept changing the storyline and the things I want to show. But I finally found the story I want to tell. 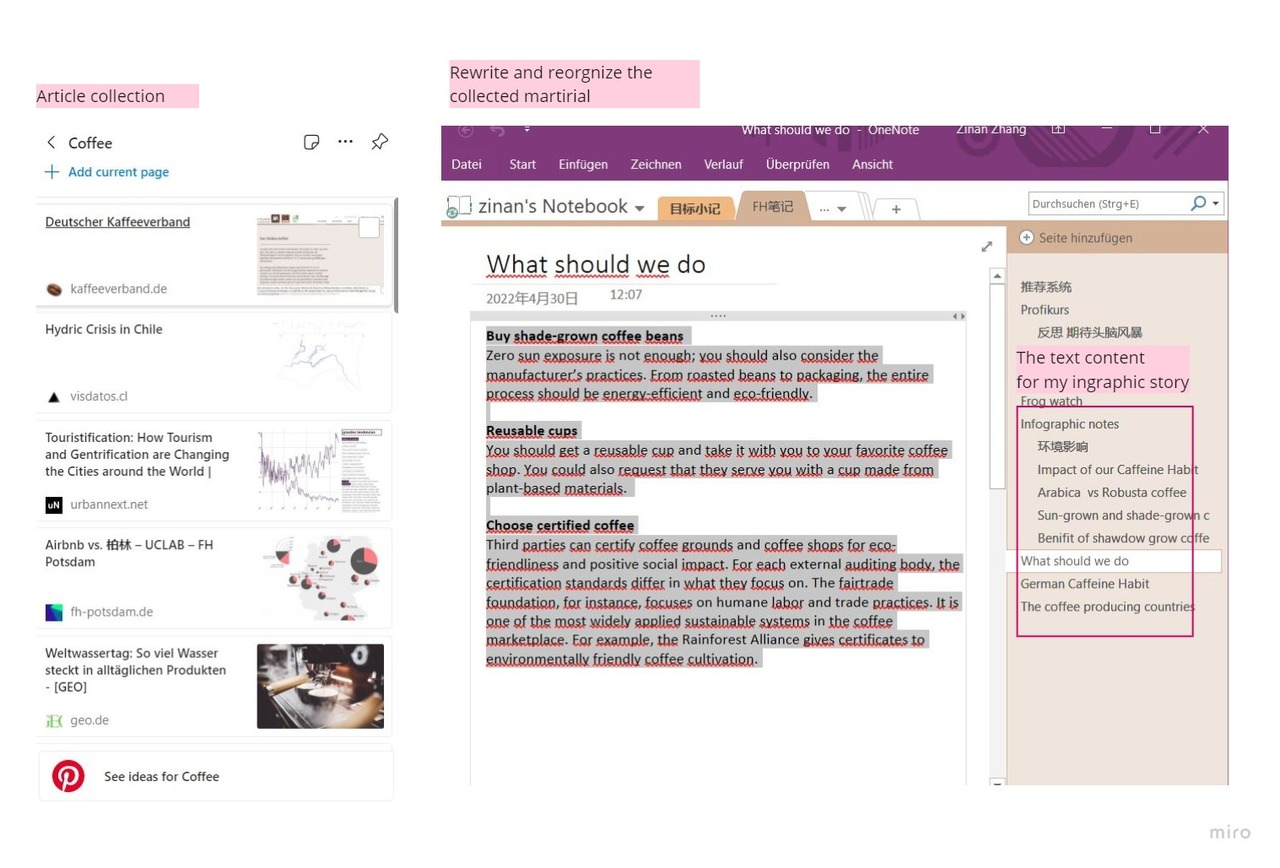 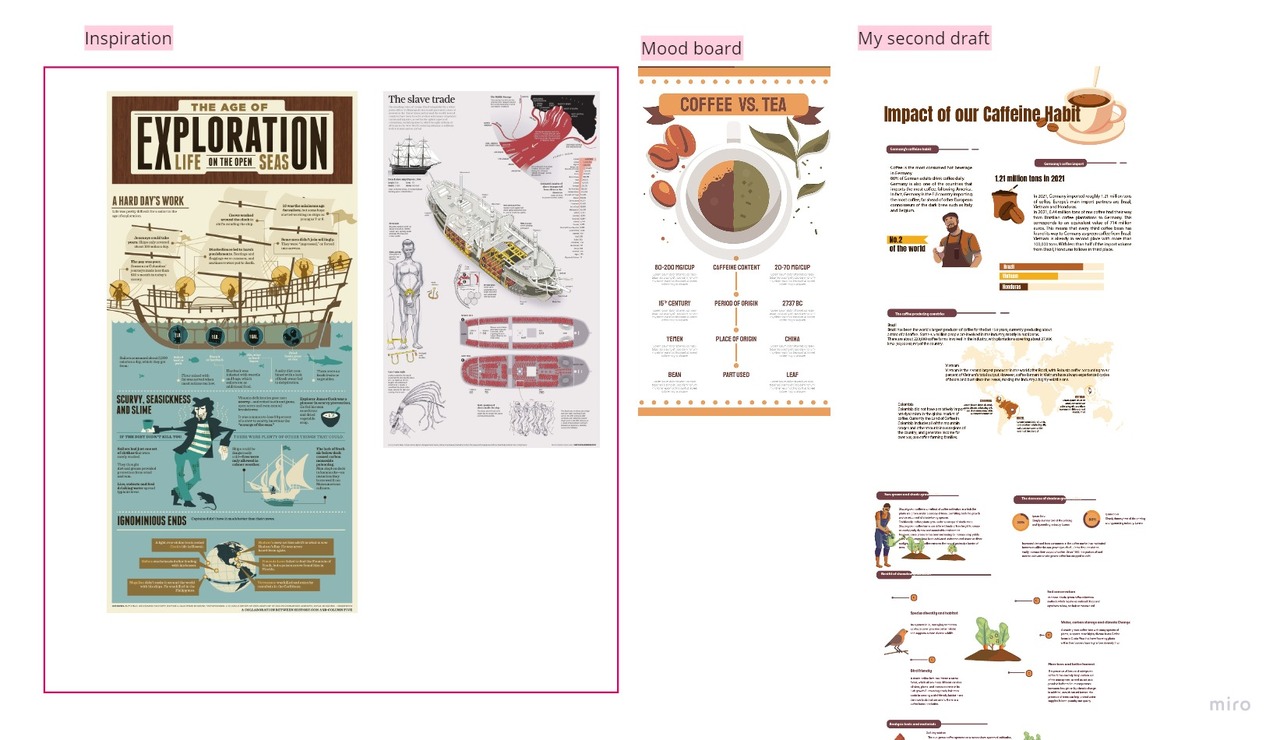 I ended up spending a lot of time on the details, thinking about typography, font choices, etc. It still takes a lot of time to make these decisions. I have spent a lot of time making the colour swatch for the infographic, also I tried several versions of paragraph styles and compared them in Miro. The hard-work paid back and I am satisfied with my final visualisation.