The Origin of the Birds

The goal of this project was to create an illustrated book/comic based on Italo Calvino's story „The Origin of the Birds“ from „Cosmicomics“, a collection of 12 short fiction stories, built around various scientific facts. Participants of the course were provided with absolute creative freedom as to how design their books.

The following is my attempt to document my work-flow, while working on this project.

For the art style of the book I decided guide myself by work of Michael Kirkbride, known for his expressive line-art and beautifully surreal imagery he created. My fascination with Kirkbride's art work also set a distinctive mood to concept of my book: bizarre and alien. 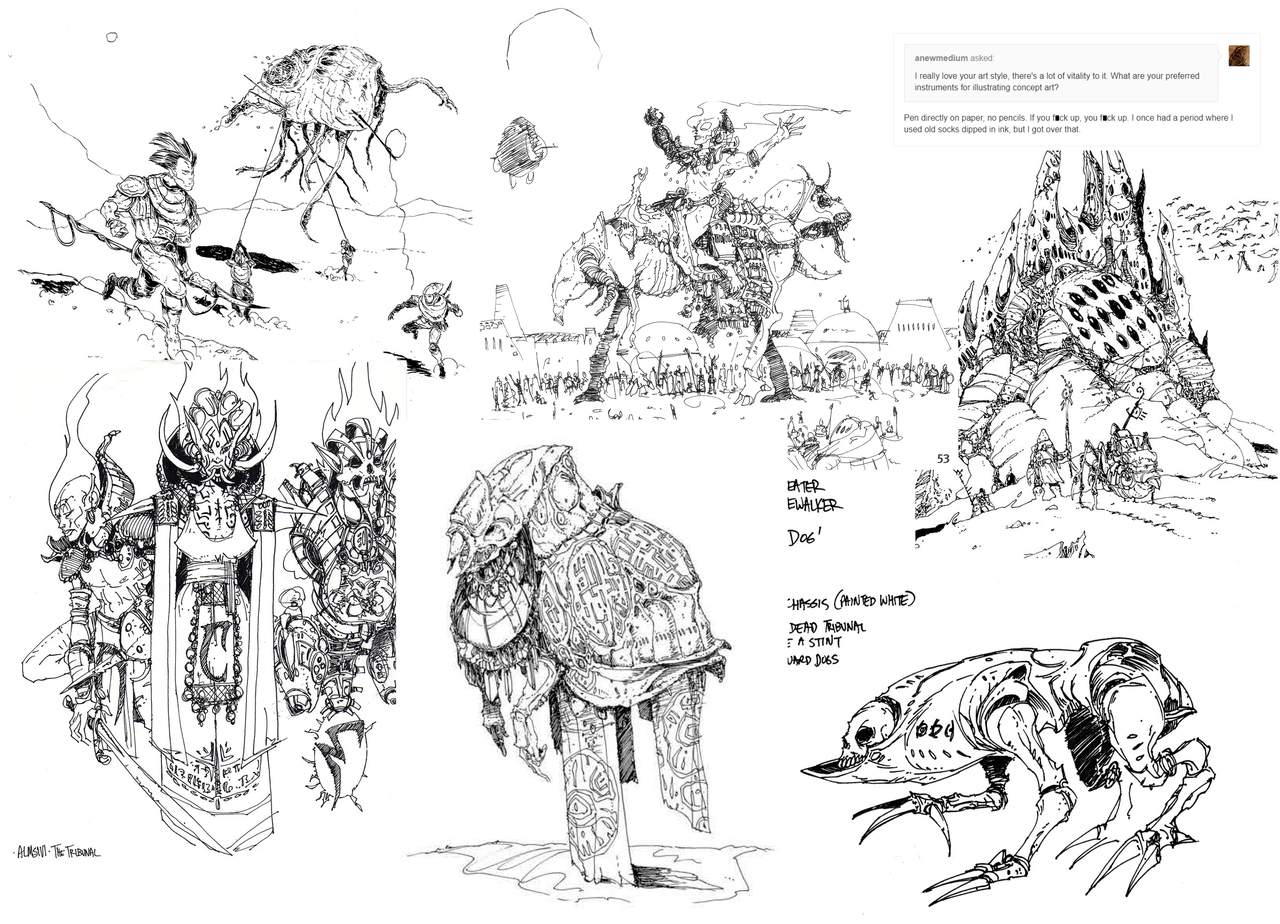 Jean Giraud's (better known as Moebius) work also left quite an impression on me and I decided to include some of his art into my moodboard as well, since I was going for that „bizarre/alien“ feel. 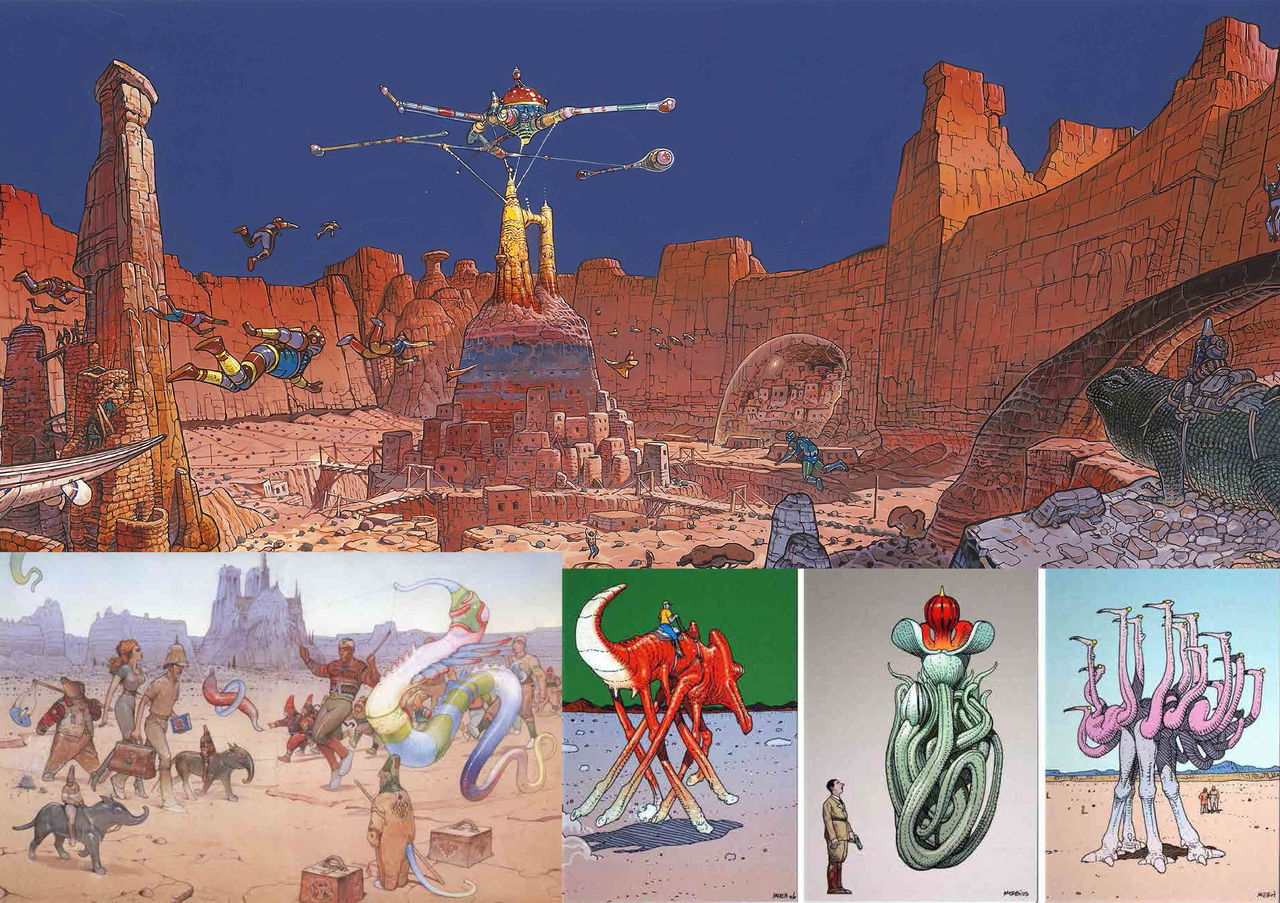 I wasn't entirely sure if I want to include any additional colors to my art-style, since coloring takes some time and I know how slow I tend to work. Furthermore, I believe that color is overrated anyway. So I decided to go with black-and-white aesthetic and let the reader color my drawings in their head, while reading the book. I'm sure they can handle that. 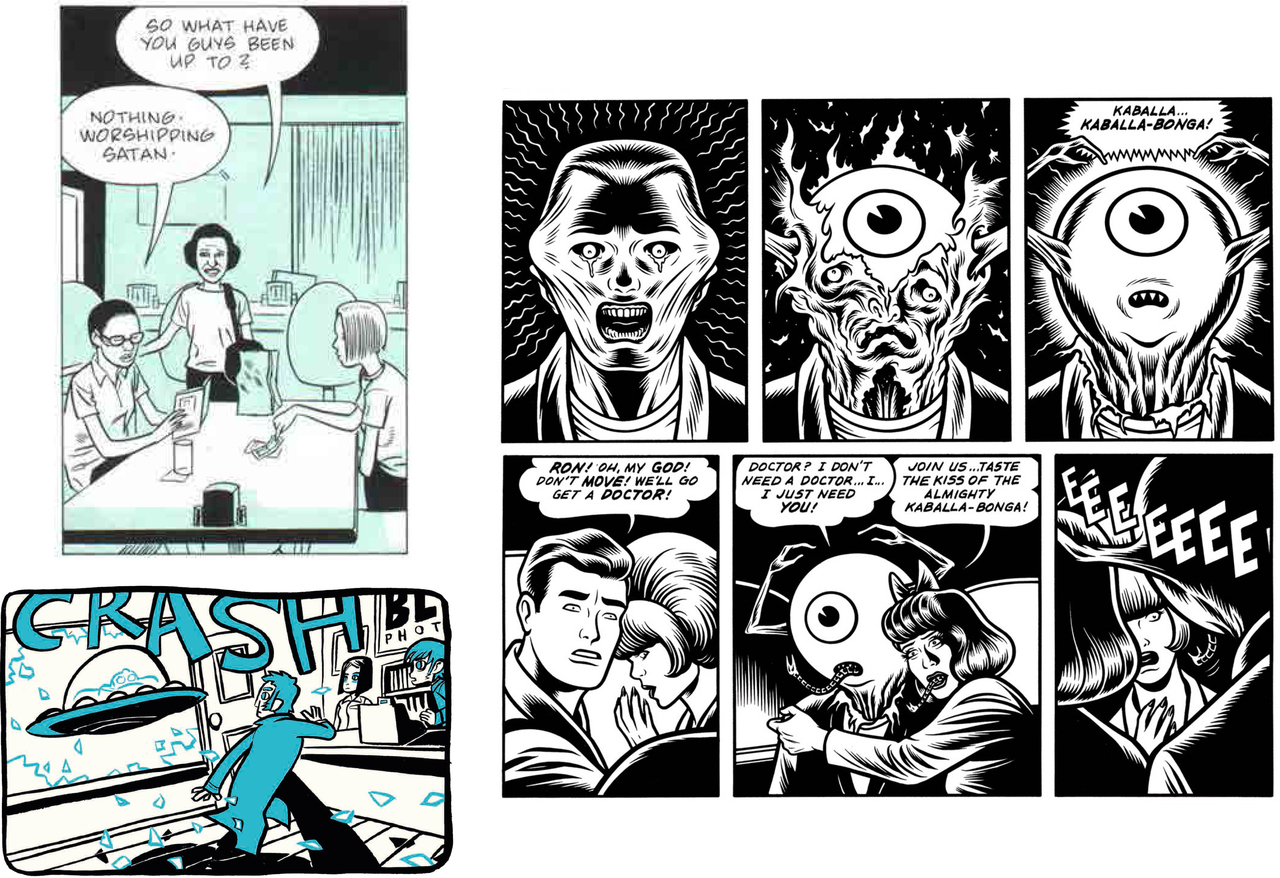 TEXT PROCESSING AND A DUMMY-BOOK

After I was finished with my mood-board I proceeded with text processing. I went through the story marking the parts, that I would rather to not to include in my book (such as Italo's instructions regarding how one or the other scene should be illustrated, for example). In couple of instances I also excluded one or two lines of text, because they were, in my opinion, breaking and interrupting my illustrative narrative. I simply couldn't include everything, without risking the book becoming an incoherent mess of text and pictures.

Overall I tried to stick to the original as much as possible. 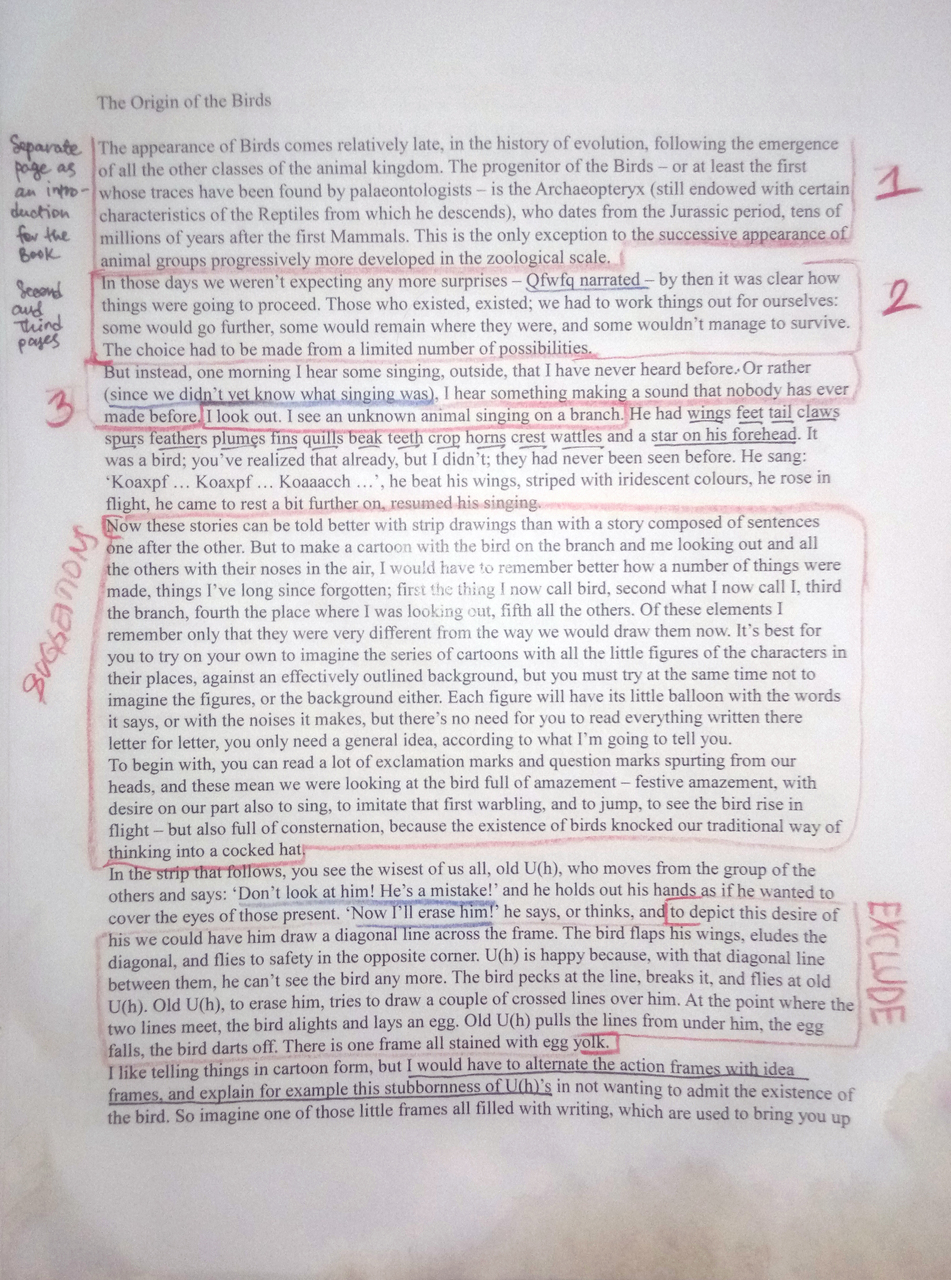 I also made something I called a „story map“, which would help me navigate myself through the story, while working on a book. 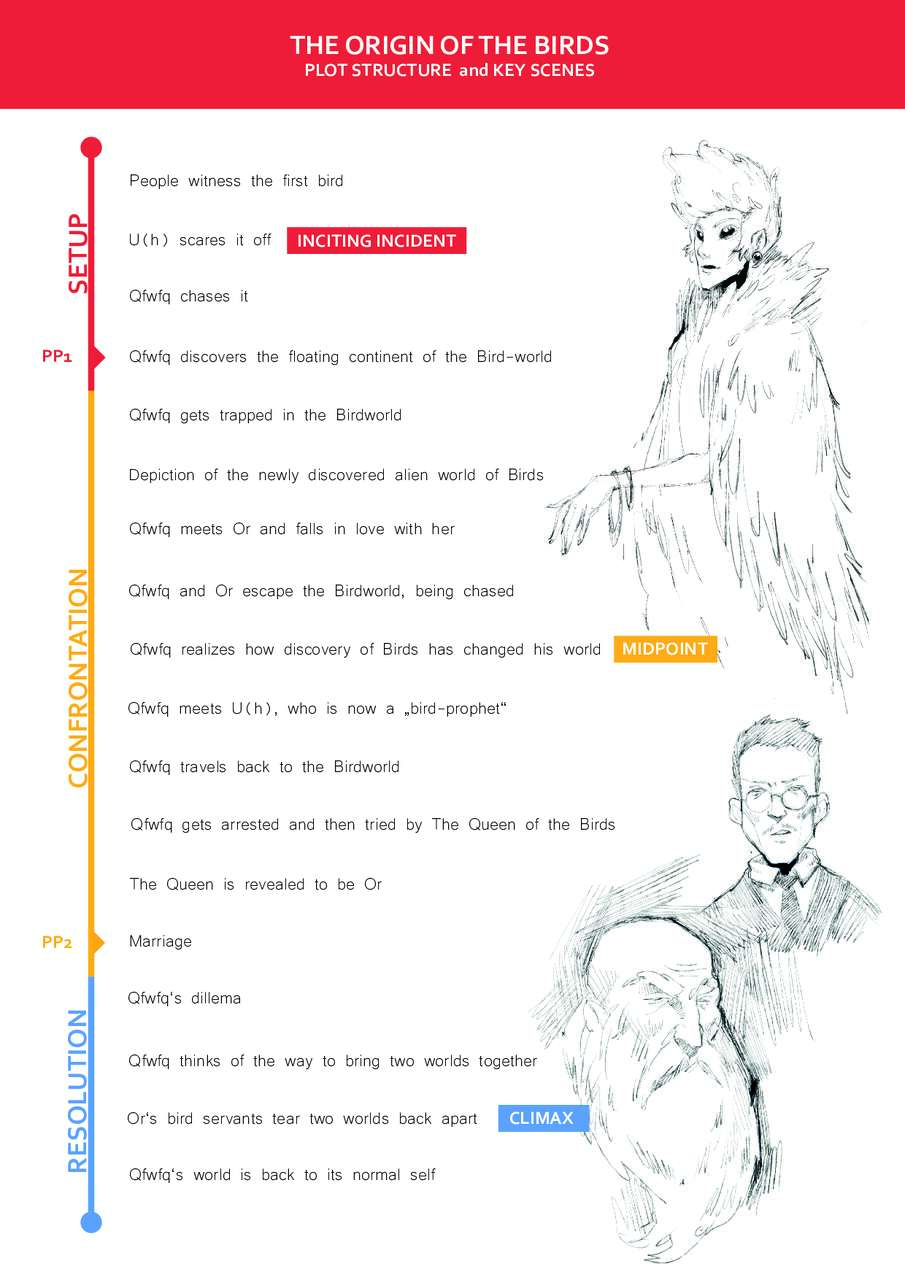 Next step was to create a dummy-book and a storyboard for my future comic. 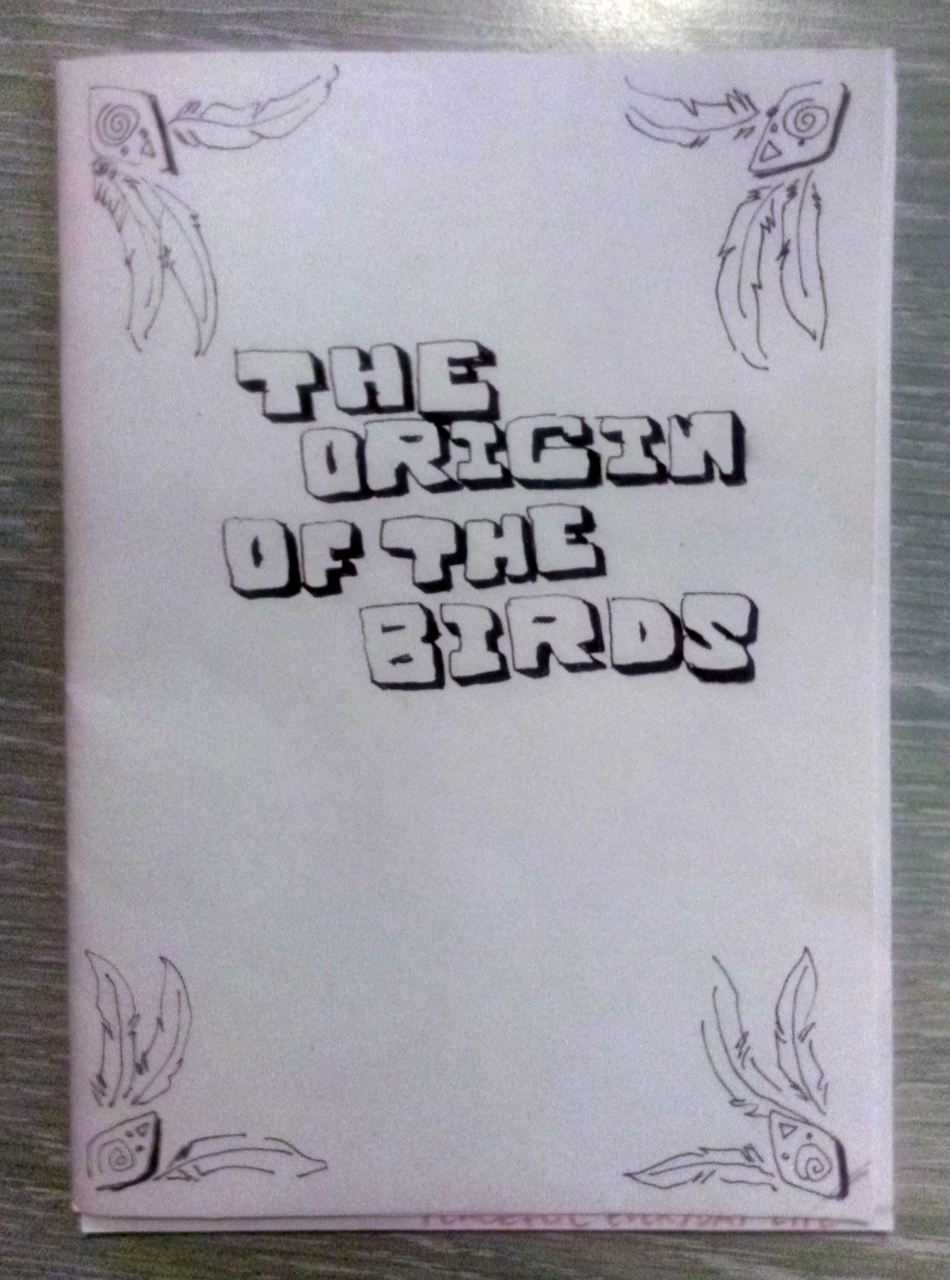 Already while working on a storyboard, I decided I wanted my book to be a mixture of a comic and a traditional illustrated book. I believed, that this symbiosis would help me deliver the story to the reader even better.

I chose A5 portrait to be a format for my book because of its resemblance to a traditional american comic. In addition, I personally prefer A5 because of its convenient size: not too big, not too tiny. Handy.

This section is devoted to, you guessed it, visual concept of the characters. 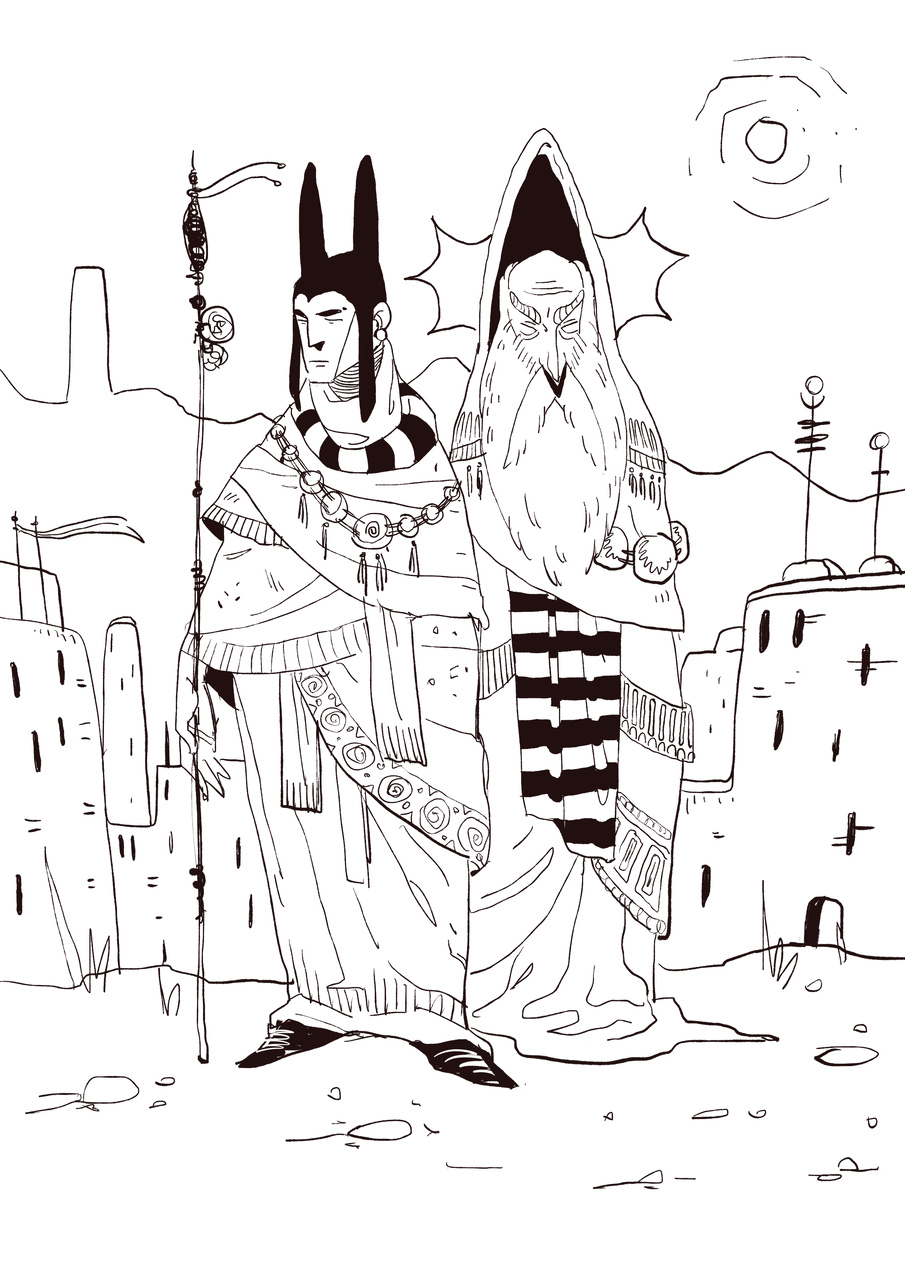 Once I determined the visual style of my book, I proceeded to search for a fitting typeface. Since I wanted typeface of my book to complement the line weight of my drawings, I prepared a series of images, where I put a sample of my art work side-by-side with various fonts. This was done to help me to compare different instances and find the most suitable. 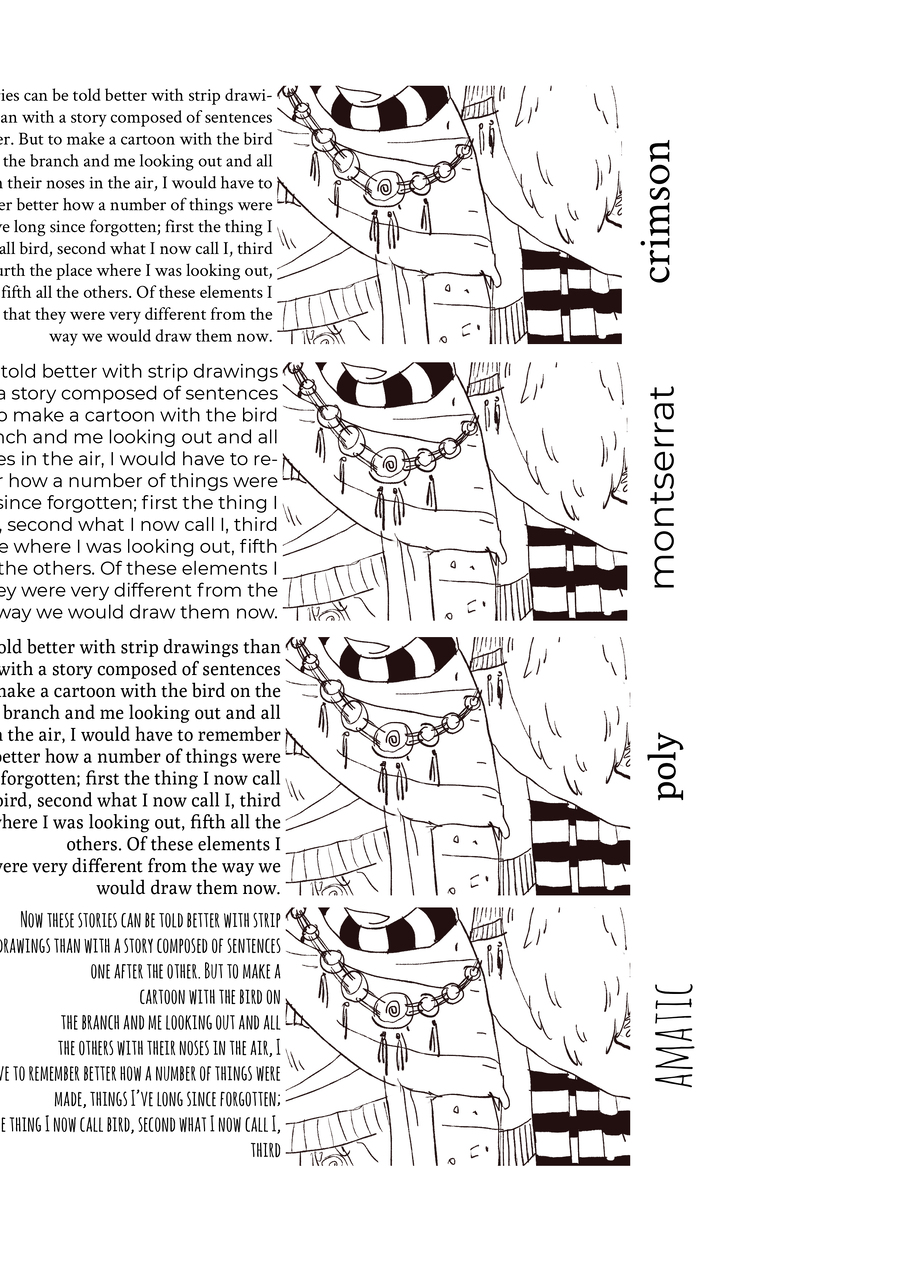 After brief discussion with Frau Holst, I settled with Crimson (12 pt) for narrative text and Moon Flower (weight varies) for speech bubbles.

I picked a serif-typeface in hope, that it will help to bring more gravity and seriousness to my book. Even though I choose my book to be partially a comic, I still was trying to avoid making it too „comicy“ (I don't think that's a word). This is also a reason, why I didn't use any onomatopoetic (that's actually a word) depictions of sounds. Well, that is except for one instance, where I had to do it.

After everything was prepared I started to illustrate the story. It was a long and exhausting process and I really don't have much to tell about it. Except that it was really long. And exhausting. And long.

Below you can have a look at some of the pages and maybe gain some understanding as to what my drawing style is. For binding I went with standard saddle stitch or staple binding. I think it serves its purpose well, it's simple and I really don't see any reason to go with anything more complex.

The course was intense, nonetheless fun. I especially enjoyed theoretic input from both professors and in general learned a lot from it. I'm really glad, that as a result of this course I managed to accomplish a rather difficult task: make an illustrated book from scratch. It was a challenge, and I had my ups and downs along the way, but in the end I am happy with the result.
Can't wait to practice newly acquired skills in the field.

The first comic, as a sequence of images telling a shared narrative, can be traced to as early as 110 AD. Trajan's column in Rome is one of few surviving examples of sequential art. Egyptian hieroglyphs and Greek friezes also fall under this category.

During medieval ages many Bible verses were often depicted in a series of images to bring the teachings of Christianity to illiterate.

The invention of a printing press brought a separation between image and type. Early examples of printed materials were mostly concentrated on the religious aspect of life, but through 17th and 18th centuries they started to shift towards political and social life. And that's how illustrated satire and caricature was born. During this time a speech bubble, as a means of attributing spoken word, was also developed.

“The Glasgow looking glass” (1826) arguably considered to be the first comic magazine composed of a number of cartoons ridiculing fashions and politics of the time. It also featured all the elements we today associate comics with: speech bubbles, series of captioned pictures building one narrative and caricature. 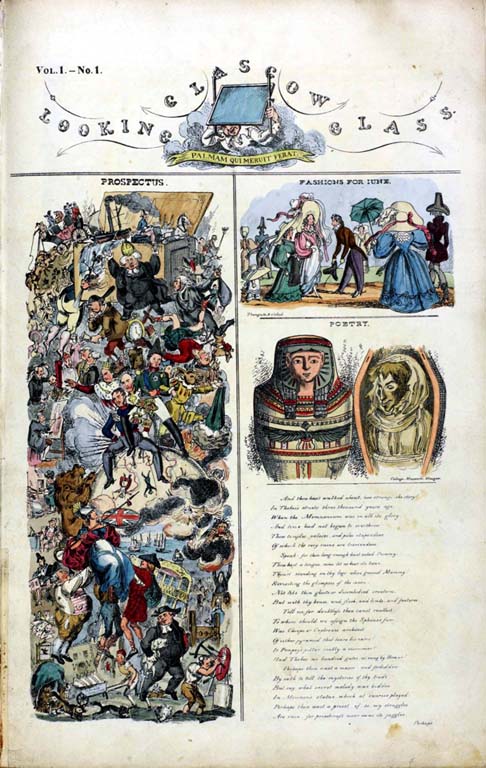 A Swiss artist Rodolphe Toepffer considered to be quite an influential figure in early 19th century. He would supplement his series of sequential images with addition of text below them. A lot of his works were translated and illegally reprinted around the world.

In 1865 German artist Wilhelm Busch published his first strip comic about Max and Moritz, which then inspired Rudoplh Dirks to create The Katzenjammer Kids. 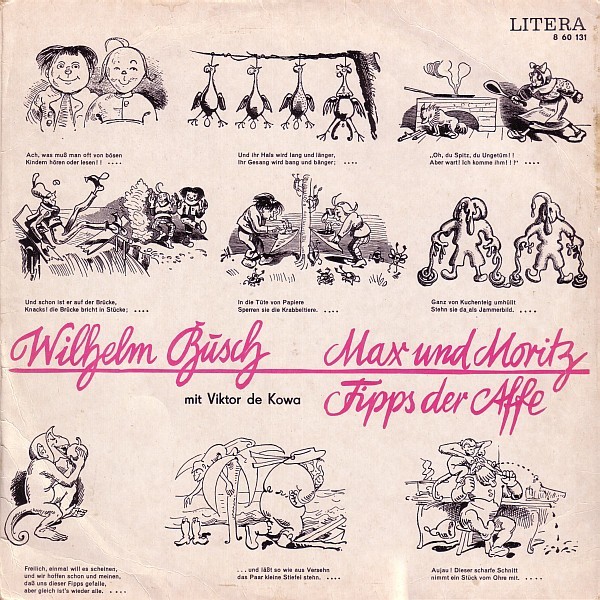 In the second half of the 19th century American cartoonist R.F. Outcalt through his skillful combination of speech bubbles and imagery in The Yellow Kid and Hogan's Alley established the form and conventions of modern strip comic. 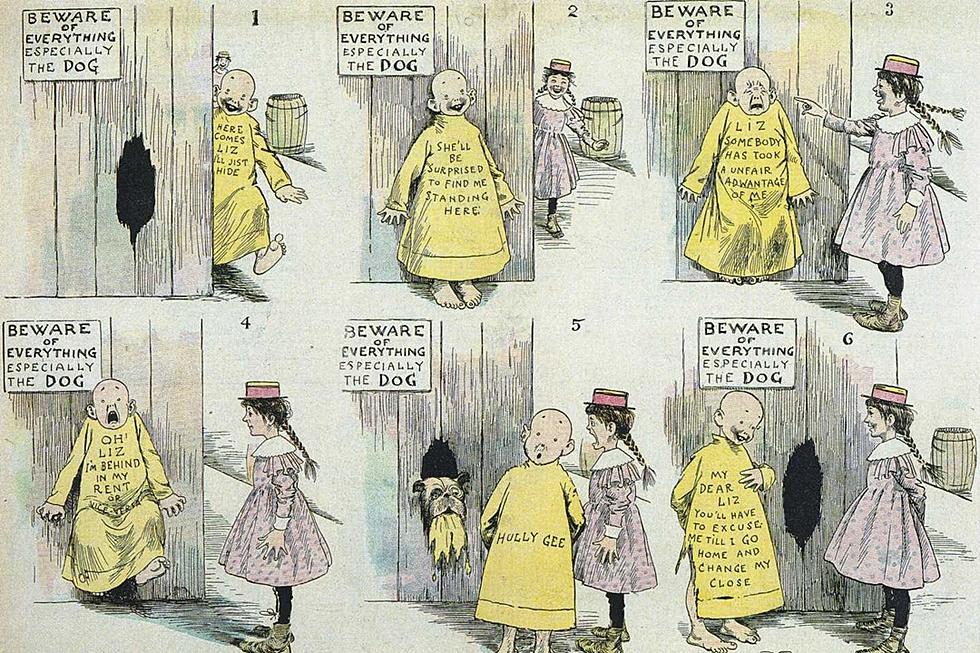 1920s-30s marked further boom of comic industry. British magazines The Dandy and The Beans, targeted children audience through use of juvenile humor. In Belgium Herge creates The Adventures of Tintin. 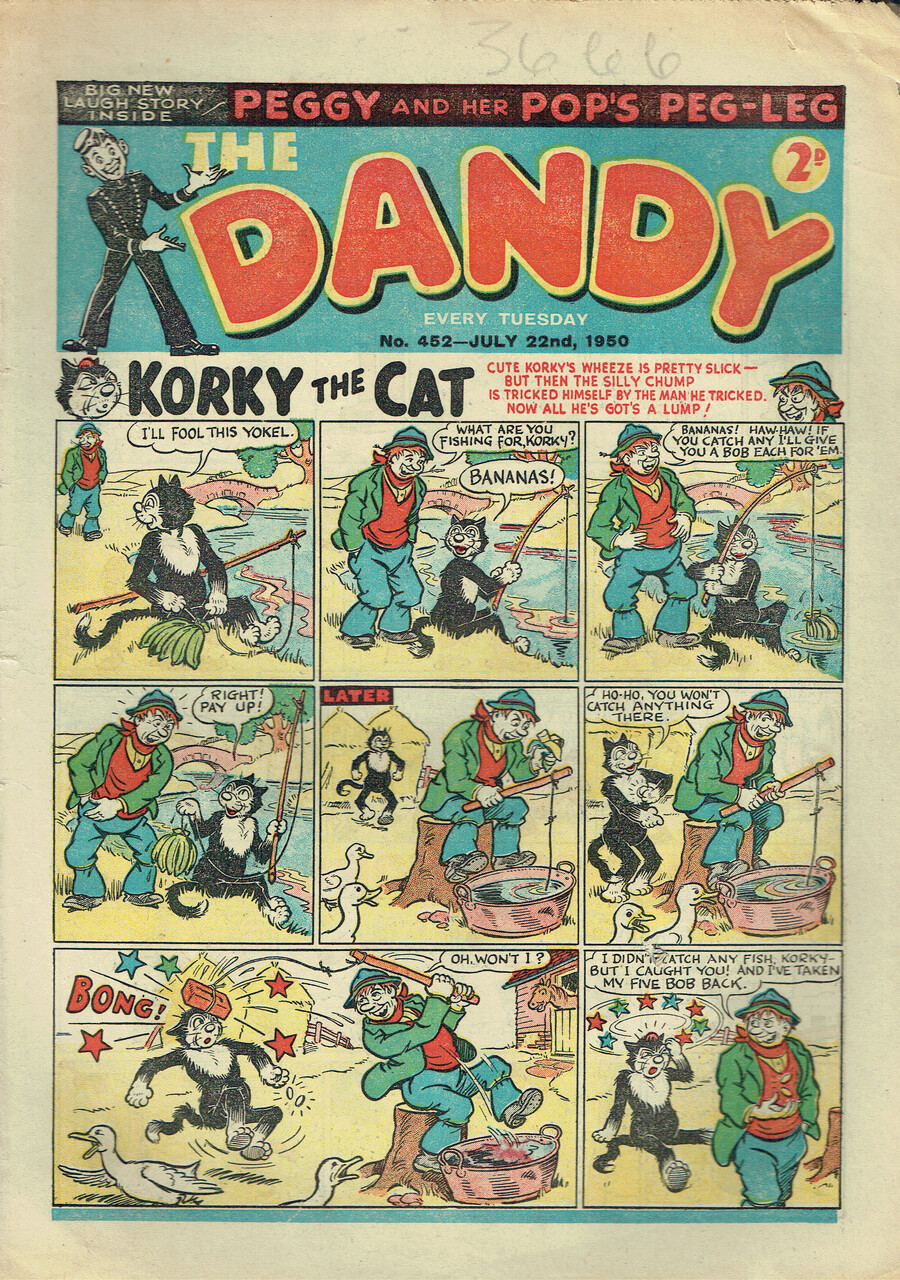 In US newspaper expand their comic supplements beyond humour, with action, adventure and mystery themed strips. A market for such comic books soon followed, and by 1938 publishers start to print original material.
During this time Action comics #1 is being launched with Superman featured on the cover. Popularity of this character swiftly established a super-hero as the centerpiece for American comic industry. 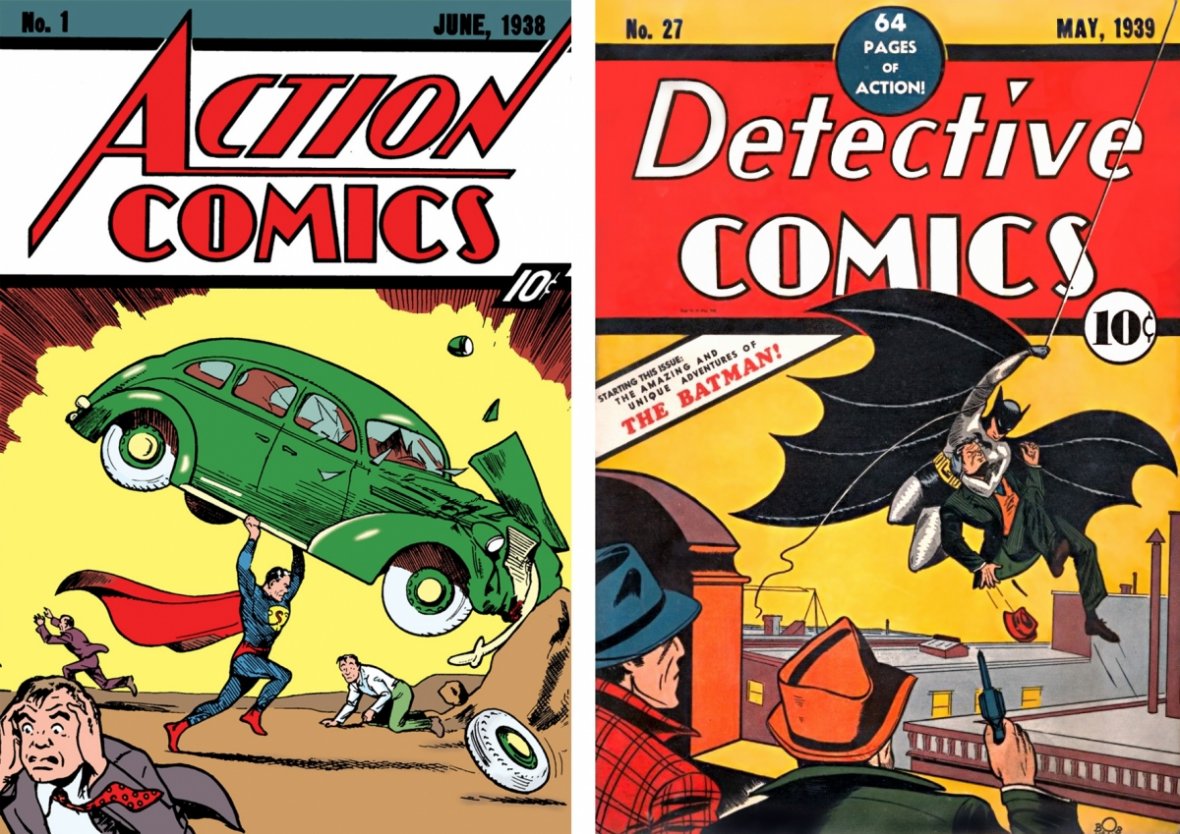 In Japan the art of manga is being born. It was established after World War II by Japanese artist Osamu Tezuka. The wide range of themes in manga included adventure, romance, adult fantasy etc. 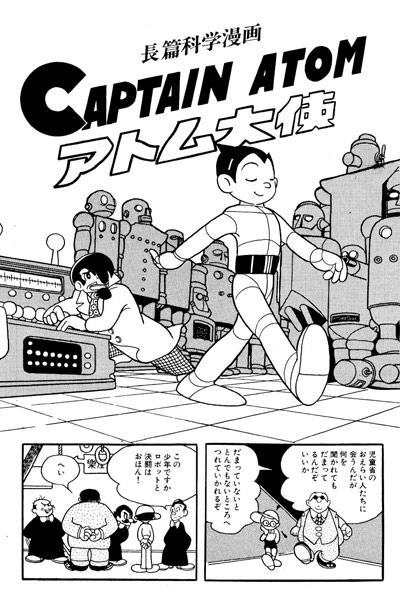 In the mid 1990s a digital comic starts to appear. Due to nature of world wide web, artists of different levels could freely publish their works in Internet. Scott McCloud described in 2000 how digital comic artists can revolutionize the format by utilizing the digital space and use newly discovered techniques.

CONVENTIONS OF COMIC AS A FORM

A toolset of a standard comic includes, but is not limited to:
-Panels
-Speech bubbles
-Captions
-Color
-Line weight 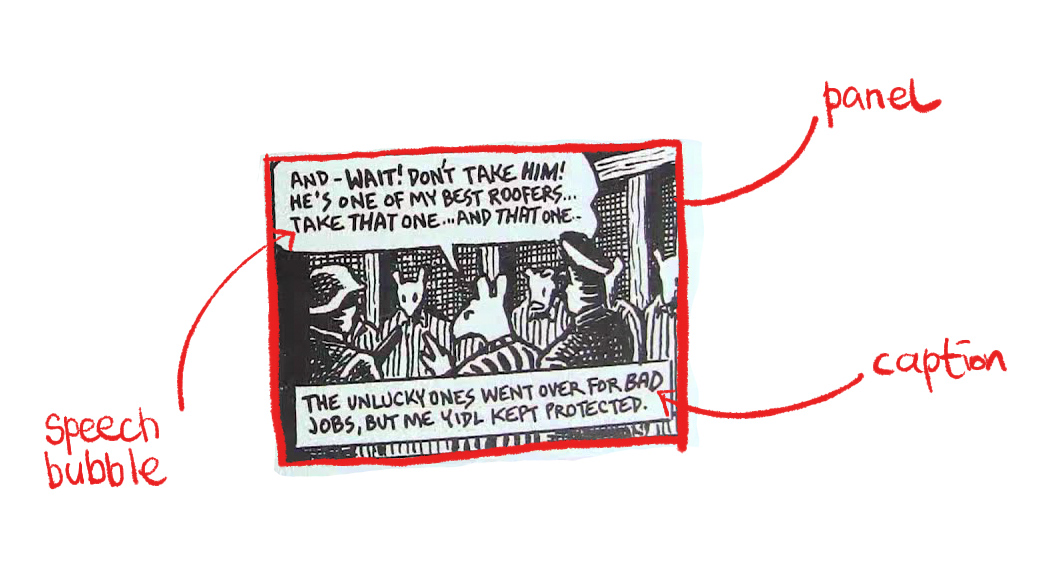 This is typically a single drawing in a multi-picture sequence. The borders are usually rectangular.

Means of attributing a spoken word and dialogue. The borders of the speech bubble can emphasize the emotion of the character and convey a certain manner of speaking. For example, jagged border or red colored border can represent irritation and anger.
Thought bubble is similar to speech bubble, except for it's being to used to represent character's thoughts or inner dialogue.

Usually narrative text, that is not being spoken by any characters. Used for telling the story in general. Appears as text in rectangular boxes at the bottom, top or corner of the panel.

Right choice of coloring and line weight can also successfully deliver a certain emotion or mood of the scene in general. Strong and expressive brush strokes will convey completely different feeling from, let's say, fine and wavy lines.